Jerry Phele appears in The Throne, a new telenovela on Mzansi Magic.

Jerry Phele occupies an exalted place in the firmament of stardom in South African television.

It's all thanks to the role of Mofokeng that he played in the iconic multi-language comedy, Emzini WeZinsizwa.

He and Tshawe (Vusi Thanda) are the only surviving leads of this once-in-a-generation production that continues to be referenced in local pop culture and lexicon.

Emzini examined the comedic moments and interaction of four men sharing a space in a hostel, which became fertile ground for slapstick.

Each spoke their own language, Zulu, Xhosa and Sotho, but got along and understood each other. 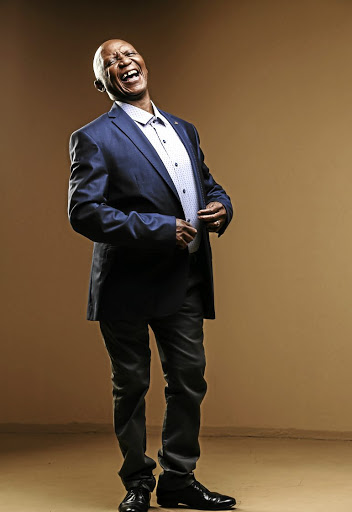 Legendary actor Jerry Phele has never let people down when it comes to making them laugh./Photos Supplied

To this day, after numerous starring roles, Phele has forsaken his identity to Mofokeng.

"I've tried to correct people, I've given up. It has become my name. Even when I meet the real Bafokeng, they call me Phoka [clan name] and ask me where in Qwaqwa I am from.

"Even my children are known as Mofokeng children and my mother is Mofokeng's mother. I now take it as a compliment, it means that the character I played really made an impression on people," he laughs.

"Emzini played a powerful role in promoting social cohesion. It showed us that no matter which language you speak, botho ke botho [humanity is humanity] and we should all be equal. Now I see how that style has been adopted on TV where you see a Zulu speaker in conversation with a Tswana and none of them compromise on their language yet they understand each other."

I'm talking to Phele ahead of his big debut on The Throne, the new Mzansi Magic telenovela from Connie and Shona Ferguson's Ferguson Films production house, coming on July 30.

He is cast as Maswabi, the village joker, who there is more wisdom to than first meets the eye.

The drama is premised around a mythical modest Tswana kingdom in today's Magaliesberg, North West, thrown into disarray when mineral deposits are discovered on their land and the legitimacy of reigning monarch Queen Mosadi Kwena (Monnye Kunupi) is questioned.

Phele warns that Maswabi is not a reprisal of the character of Mofokeng simply because of the comedy, but he reckons it's time he sheds the name.

"I made Mofokeng so real that it cannot be erased from the minds of the people. I'm still looking forward for something powerful to surpass that role. Hopefully this is it."

The timing is perfect for Phele.

"Ferguson Films called me [to say] that they had a role for me and I accepted immediately because I was available. We did everything quickly.

"I'm comfortable with roles with a strong sense of humour and the leeway they provide to express yourself.

"It's my first time in a telenovela. I have been longing to work with the Fergusons since I saw The Queen. I have a long history with Connie from our previous works. I was amazed by how professional they are. The company is owned by a couple that understands the industry and respects artists."

He welcomes the comfort and security of a monthly income from a year-long contract.

"You can achieve things you have wanted and the money will cover a lot of your needs; it's almost like having a permanent job that can sustain you. At the end of the year when you rest, it's a well-deserved break."

He says he's been living on voiceovers, commercials and some TV dramas, but could go for a month or two without any work, and still wouldn't think of a career change.

Phele says he'd like to be remembered for his diligent work that he delivered with respect and honour. "It's not only about the money, it's about the purpose."