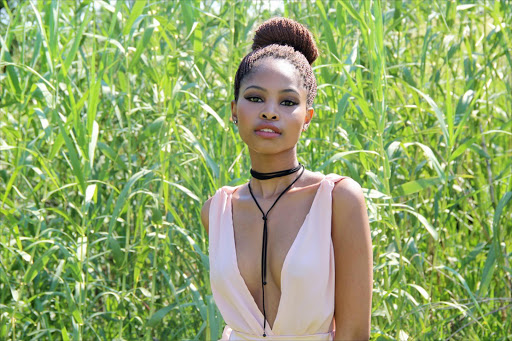 Nandi Mbatha answers to her showbiz calling as she debuts in the new Mzansi Magic youth telenovela, Isithembiso, from Monday.

The budding actress portrays a rural girl from KwaZulu-Natal, Simlindile 'Simi' Ngema, who moves to Johannesburg in search of her mother and job opportunities. She has to deal with the challenges that come with chasing the dream which turns out to be not so much of the fairy tale anticipated.

The 20-year-old first-time actress says adapting to the new environment was not as easy as she thought.

"It was overwhelming and surreal, being on camera and reading scripts was all new to me. I'm just lucky and humbled because I work with experienced actors who have been in the industry longer, who are able to guide me so I am learning a lot," says Mbatha.

She adds that she enjoys playing the role of Simi.

" Sometimes I get so comfortable playing Simi that it becomes challenging to snap out of character because we have so much in common," she says.

Mbatha, who regards acting and modelling as her calling, says she has the support of her family and friends.

"I'm excited and scared at the same time but I know I can handle it. I don't want fame to change me into a person that I don't recognise," she says.

The actress says sharing screen time with veterans such as Hamilton Dlamini and Meshack Mavuso is a dream come true.

Mbatha hopes that the opportunity will open more doors for her in the future. Isithembiso premieres on Monday April 3 at 7.30pm on Mzansi Magic.