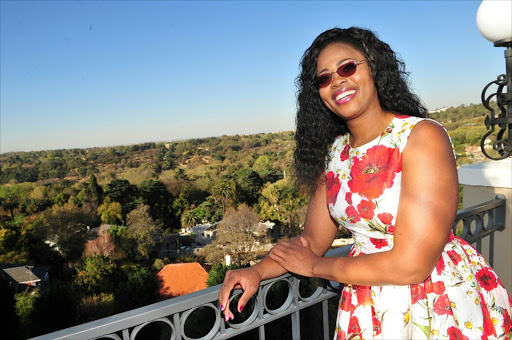 She is soaking in some sun at the swanky Four Seasons Hotel as she sips on passion fruit and lemonade when I sneak up behind her.

She extends her hand and immediately shares a story. "I've been starring at that thatched hut ..." she points to the zoo.

"And while remembering where I come from, the village I grew up in, I saw an elephant walk past. I immediately thought of my grandmother. I sit here now, but it has not always been like this."

She's in a stunning floral dress by Dolce&Gabbana, with some trendy sunnies.

She carries on with her story.

"I was born at home in a hut in Driefontein, near Piet Retief, and was brought up by my grandmother.

"I always felt like a princess. As I look at this view I have the image of then and now. I have both girls, the girl who had all the love of her family, who never knew there was something poor about them, she was loved and taken care of and treated like a princess. She believed that one day she would live in a castle. And I also have the girl who dreams of building her own castle."

Yende, 31, is by far the most popular and successful black soprano South Africa has produced.

She has been living in Milan since 2009 and has performed on some of the biggest stages in opera world - from Paris, to New York to Barcelona.

Her life changed forever when, at 16 in 2001, while watching television at home, she heard the Flower Duet from Delibes's opera Lakme on a British Airways advert, when the light bulb went off.

She learnt that the haunting music was opera and she immediately abandoned her plans to become an accountant and, instead train to become an opera singer.

Yende got a scholarship to study at the South African College of Music in Cape Town under Professor Virginia Davids, who was the first black woman to appear on opera stages at the height of apartheid. Under Davids's tutelage Yende's talent blossomed and zoomed up the opera ladder in no time.

While she is here to promote her much awaited debut album, Yende also shares the exciting news that in December she will be stationed at the Metropolitan Opera House in New York. This is part of deal that will see her have two opera productions in a season until 2021.

She gushes: "This is mounted just for me. It's a big deal. The Metropolitan is allowing talent to surpass the colour of our skin. I'm happy that they believe in me so much. La Scala is my artistic home, but the Metropolitan is becoming another home. This happens to the most famous opera singers, and for this little girl who grew up in that hut, it's like humungous."

She also looks forward to her debut at the Royal Opera House in Covent Garden in London next May.

Back to her new release, titled A Journey.

The music, divided in two parts, the arias and the cabaletta, was recorded in Torino with Sinfonica Nazionale della RAI under the baton of Marco Armiliato, last August.

The seven tracks have a connection or symbolism to Yende. They take her back to her finest moments and the rapturous applause she got on world stages.

In Rossini's Le Comte Ory Yende earned critical acclaim when she replaced Nino Machaidze at the Metropolitan Opera in New York in 2013, which marked a turning point in her career.

She stole the show at Plácido Domingo's Operalia Competition in 2011 when she sang Bellini's Beatrice di Tenda.

"I wanted my voice to reach every corner of the earth because of the joy I felt. La vite e bella, life is beautiful."

Her piercingly sharp and goosebump-inducing voice should be declared a precious natural resource in South Africa because of its strength and unique quality.

Yende's collection of seven arias and cabaletta takes you to another world. She hits the high notes with such ease and sincerity you can't help but fall in love with classical music. While some of the tracks can be dense and intense, she makes it accessible to all ears. Lakme is a tune most music lovers have come across and she brings it to life with mezzo soprano Kate Aldrich.

There is emotional richness in her delivery, even when she plays around with the notes and glides with them.

This album proves why Yende is one of the most beautiful voices to come out of SA.