No joke, Tumi Morake is the queen 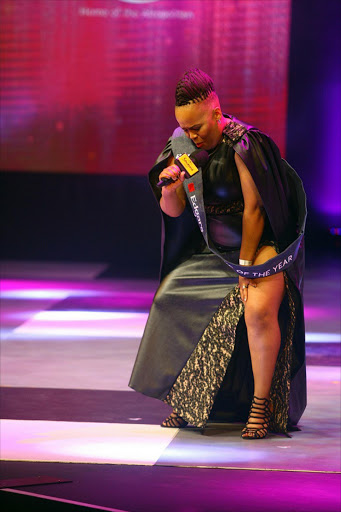 Comedian Tumi Morake keeps proving that she can hold her own against her male counterparts effortlessly.

She is arguably the queen of local comedy, but she coyly avoids such a bold statement, citing that everyone is a queen in their own right.

"I will say un-apologetically that I have paved the way for a lot of female comedians.

"I made it easier, therefore the others with their talents were given a better chance. I made them see that it was possible," says Morake.

"I have always said I wanted to be a pioneer like my mother, and I have managed to do it. I have been a trailblazer, but I'm so humbled and so hungry that it's not enough.

This past weekend Morake got her stamp of approval when she made history at the 6th annual Comics' Choice Awards, where she became the first female to be crowned Comic of the Year. She beat the likes of Loyiso Gola, Mashabela Galane, Skhumba Hlophe and Carvin Goldstone to the crown.

Morake showed up on the night looking regal in bespoke Brenda Khambule creation, complete with a cape and exaggerated shoulders.

After her win, she fittingly got the royal treatment, with a denim sash and her very own throne.

"I remember on the night, about two categories before my win was announced, I held my husband's hand and told him my chest was tight.

"I just realised how badly I wanted it and how upset I was going to be if I didn't get it. When they said my name, I have never doubted my own name so much. I looked around for confirmation and everyone was up on their feet," Morake recalls.

"I've come down from the euphoria, but not the significance. People must understand, this award is not saying, 'I'm funnier than them'.

"These guys are saying they are acknowledging my hustle, they are saying I'm continuing to be relevant to comedy and breaking boundaries.

"It's all growth. A big-up [to] these men for being feminists."

So what's next for her now that she has the award? Morake reveals that in October she plans to embark on her very first nationwide stand-up tour. She has also just landed a role in an upcoming local film, her first as a lead. She also continues to be part of the successful stage play Tease!

"I feel like I have nothing to prove anymore. I can have fun now; raise my babies, do my comedy my way and stop chasing the whole corporate scene, tour the country and let the people meet Tumi Morake the comedian."

In her 10 years of doing stand-up, Morake says there have been a lot of struggles, the biggest of which being finding a balance between being a mother and being on the road a lot.

"Male comedians can have babies all the time, but they are back on stage as soon as the baby is born.

"Then there is the fight for money and knowing your self-worth, where you want to charge a certain amount - but the corporate world is still a very all-boys club ... at one stage you get to that point where you go, 'I don't care, this is how much I cost'.

"You want quality and premium; this is how much I charge."

But throughout her hardships, her actor and screenwriter husband of seven years Mpho Osei-Tutu has been there to pick up the pieces.

The couple have been together for 14 years and are proud parents of three children.

"He is one of the biggest supporters that I have.

"The entertainment industry is not kind to marriage. You have to marry your best friend. I don't know any man who will understand me crawling into bed at 3am smelling like smoke, and I don't even smoke."

Morake maintains that her family has been the reason for her to last this long in comedy, because they keep her grounded.

"You win an award and you think I'm a star. I was sadly mistaken, at home I'm still mommy."