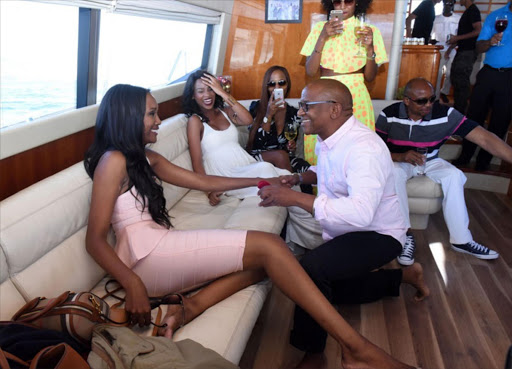 Internationally renowned composer and producer Lebohang Morake ‘Lebo M’ and his fiancée Zoe Mthiyane shocked fans with the news of their split on Tuesday evening.

After what seemed like a whirlwind romance Lebo M confirmed to Sowetan that they had decided to call it quits “amid disagreements over a pre-nuptial agreement.”

The news comes as a shock to fans after what seemed to be a fairytale come true. We take a look at the milestones in their relationship…

Lebo M and Zoe first worked together in 2007 when The Lion King musical was hosted in South Africa as part of the musical’s ten year celebrations. Zoe‚ who is also an actress and singer‚ was cast as Sarabi.

Reports of a budding romance between Lebo M and Zoe first emerged in 2014‚ when the couple were said to have met again during the opening of Lion King Melbourne. It was reported that it was during this period that their love affair seemed to have blossomed.

They announce their pregnancy in 2015

The renowned film producer and Zoe found themselves hogging headlines once again‚ after news of Zoe’s pregnancy emerged. Lebo and Zoe once again kept the pregnancy under the radar with Zoe sharing a rare picture every now and then on social media.

Their baby arrives in July

On 24 July last year Lebo M announced the arrival of their baby girl. Lulu is her name‚ and as mentioned‚ every now and then fans are lucky to get a glimpse of the baby.

During a family vacation to Cape Town Lebo M got down on one knee and proposed to Zoe with a custom-made diamond encrusted ring‚ which was said to be inspired by the song Circle of Life from The Lion King. This was in December‚ just five months ago.

Lebo announces their split through a press statement citing disagreements over their pre-nuptial agreement. Zoe has remained mum about the split only sharing a series of cryptic social media posts about a “new beginning” to Instagram.

This would have been Lebo M’s sixth marriage and Zoe’s second. The actress was married to sports presenter Robert Marawa and has an older son with him.