If you gave up smoking when lockdown started and can maintain that until the end of September and beyond, you could save significantly on your life insurance premiums. 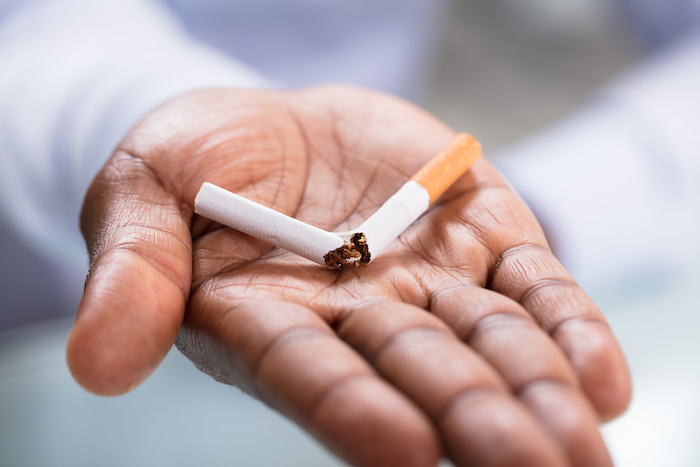 A research unit at UCT found that an estimated 800,000 to a million smokers had chosen to end the habit due the ban on the sale of cigarettes during lockdown.
Image: 123RF/ANDIY POPOV

An online survey by the Research Unit on the Economics of Excisable products at the University of Cape Town (UCT) found that an estimated 800,000 to a million smokers had chosen to end the habit after the ban on the sale of cigarettes during lockdown dragged on for months.

If you could get a fix during lockdown you had to fork out up to four times as much as you would normally pay for a packet of cigarettes.

To be considered a non-smoker you have to have given up smoking for at least six months and you would have to pass a cotinine test, Lisa Gibbon, divisional executive of onboarding at Liberty, says.

Cotinine, nicotine's main breakdown product, can usually be detected in your body for up to three months after ingestion. Most insurers require that you have not smoked for 12 months before you are considered a non-smoker.

The consensus among life insurers is that more people are giving up.

What qualifies as smoking?

Any ingestion or inhalation of chemical substances is considered damaging to your health, so the occasional use of hubbly bubblies or hookah pipes, social smoking in any form no matter how seldom, vaping and even nicotine patches, will all result in you being classified as a smoker for life insurance purposes.

Sanlam's chief medical adviser Dr Friedel Kerchhoff quotes research showing that using a hookah for an hour can equal smoking 100 cigarettes and there is increased risk of infection from use in a group.

Only 9.3% of Old Mutual’s underwritten lives for the first half of this year were smokers. Over the past three years, there has been a reduction of 0.4% in the number of smokers on average per year, he says.

Laurence Hillman, CEO of 1Life, says their book shows less people are smoking this year compared to the same time last year – which could potentially indicate that more people are opting not to smoke.

Over the past 10 years, the proportion of smokers has reduced somewhat and in the past few months the company saw an increase in alterations where policyholders changed from smokers to non-smokers, she says.

Why are smokers a higher risk?

Dr Friedel Kerchhoff, the chief medical adviser at Sanlam, says smoking is the leading preventable cause of death across the world. “Tobacco-related deaths annually number up to six million (one in 10 deaths – more than the combined death total for HIV/Aids, malaria and TB). Most deaths are related to the direct use of tobacco and a smaller number due to second-hand smoke exposure in non-smokers,” he says.

Smoking also affects the rate of disease – and is the second leading risk factor for the burden of disease worldwide.

“This morbidity burden alone has profoundly serious economic consequences in terms of lost income, and healthcare costs,” he says, and affects insurers which is why smokers pay more for cover.

So, how much more do you pay for life insurance as a smoker?

Kerchhoff says the premiums smokers pay could be up to four times higher than those offered to non-smokers.

If you fail to disclose that you are a smoker when you take out a life insurance policy, this can result in your policy being voided – no payout when you die – or a reduction in the payout when a smoker surcharge is applied retrospectively.

Money asked life insurers what the insurance premium would be on a R2m life policy for a 33-year-old man, working in admin, and how it would differ if he was a smoker.

‘Hot thinking’ in these uncertain times can ruin your finances

Behavioural scientists call thinking under stress “hot thinking” and it tends to lead us to react defensively.
Business
1 year ago
Next Article