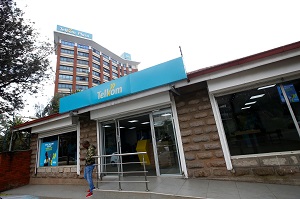 An employee of Telkom Kenya stands outside the company's shop near the company's headquarters in Nairobi, Kenya. File photo
Image: REUTERS/Baz Ratner

Telkom Kenya said on Wednesday it was no longer pursuing a proposed joint venture transaction with the Kenyan unit of India's Bharti Airtel.

Bharti Airtel had said in February 2019 its Airtel Networks Kenya unit had agreed to buy Telkom Kenya, the East African nation's smallest operator in which the state still has a 40% shareholding, after a majority stake was sold in 2007.

"After carefully reviewing the available options, Telkom has opted to adopt an alternative strategic direction and will no longer be pursuing the proposed joint venture transaction. This decision has been mutually agreed with Airtel Networks Kenya Limited," Telkom Kenya said in a statement.

South Africa's telecom operator Telkom has branched into the competitive space of financial services by launching a life insurance business that it ...
Business
1 year ago
Next Article