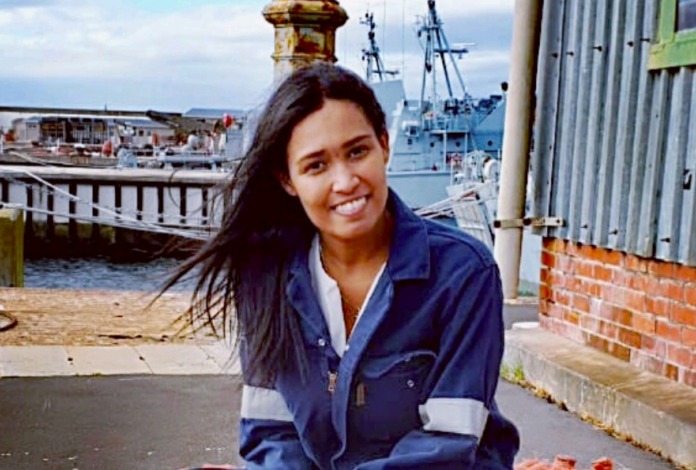 Pedro (26) recently completed an apprenticeship in shipbuilding she started in 2013 at the Armscor Dockyard,  stamping her mark on a field dominated by men.

During her apprenticeship, Pedro would work alongside qualified shipbuilders, learning how to carry out various jobs.

Candra Shanice Pedro has made history by becoming the first female shipbuilder.

“This trade is vast. What you do depends on the job at hand and which workshop you are at. If it’s metalwork, you deal with gas cutting, welding and fabrication. Or you maybe decking or carry out engineering changes made to a vessel.”

Pedro faced some challenges along the way. “Having half the stature, half the strength and also being half their age, I came to understand why this is such a male-dominated field. It also gave me great respect for the artisans working in this field.

I used to compare myself to them but at a later stage, I found out that I have my own strengths,” she says.

Pedro said as part of her journey of becoming a shipbuilder she completed matric at Spes Bona Secondary School which is a technical school. She did subjects such as technical drawing, pure mathematics and physical sciences. After completing matric she went on to study multi-disciplinary drawing office practice.

Pedro explained that this is a draughtsman qualification that only goes up to N5. “This covers mechanical engineering in its theory and every type of drawings possible such as technical illustration, structural steel development and auto Cad 3D."

She added that being a artisan is exciting.

“I am a TVET college student and a recently qualified shipbuilder who worked on our Naval Vessels for our South African Navy, working amongst many other artisans to physically keep our vessels and the Navy functional and afloat… Our trade might not be fancy but we keep things functioning,” she said.

If you want to become a shipbuilder you need to do subjects such as mathematics, physical science and technical drawing at matric level.

The urogenital system is a triumph of biological engineering. The urinary tract is a vital part of the waste or excretory disposal network.
SebenzaLIVE
2 years ago
Next Article