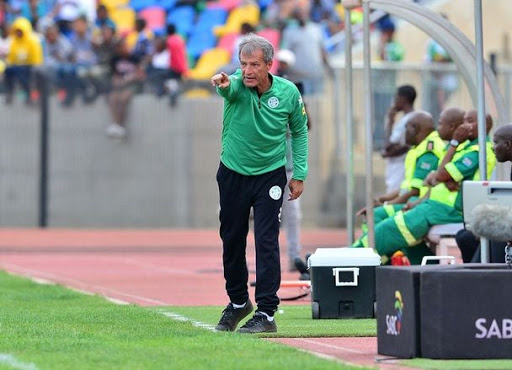 Bloemfontein Celtic coach Veselin Jelusic hopes that the positive approach of his side to their Telkom Knockout first round clash with cup kings SuperSport United will reap benefits in a fixture that has been plagued by draws over the years.

The Serbian coach has asked the Celtic players to be more positive on attack than in recent years and it has brought some benefit with the side currently sixth in the league almost of a third of the way through the season.

He says he will look to attack SuperSport as well when the sides meet at the Dr Petrus Molemela Stadium on Saturday evening.

“It is positive and brings confidence to our players when they have the right approach‚” Jelusic said.

“When we play a little bit harder and not soft‚ we can achieve more than when we are just waiting to see what will happen in the game.

"So that is a lesson for our players.

“We respect all our opponents‚ in our games we try to get the maximum out possible‚ that is our general approach.”

Celtic and SuperSport United have met on 49 previous occasions‚ with a massive 26 of those games ending in draws.

Celtic have actually fared slightly better down the years with 12 wins to 11 for SuperSport.

Celtic have also triumphed in both previous cup meetings between the two‚ suggesting that historically they have had the upper hand against SuperSport.

They have‚ however‚ exited the Telkom Knockout in the first round in seven of the eight previous seasons‚ though in the odd one out‚ 2012‚ they lifted the trophy‚ beating Mamelodi Sundowns 1-0 in the final.

By contrast‚ SuperSport have reached the semifinals at least of the Telkom Knockout in each of the last five seasons.

Jelusic will be wary of another stalemate that would take the game to penalties‚ and give SuperSport goalkeeper Ronwen Williams the opportunity to perform more heroics in the shoot-out‚ just as he did in the recent MTN8 final win over Cape Town City.

His side showed positivity to attack in both games they played in Cape Town last week‚ a 1-0 win over Cape Town City and an unlucky 2-1 loss to Ajax.

“We are satisfied that we took three points from the two games‚ it is a good result for us and an important result‚ especially as for a long time our team hasn’t taken points from Cape Town.

"So we are happy about that‚” Jelusic said.

The coach will also be able to recall Lantshane Phalane after he missed the second of those games with suspension‚ though he suggested it is no given that he would return.

“Phalane is a good player‚ but of course we have a lot of good players.

"[Given] Mashikinya‚ who came into the [Ajax] game‚ played quite well and we are also satisfied with his performance.”