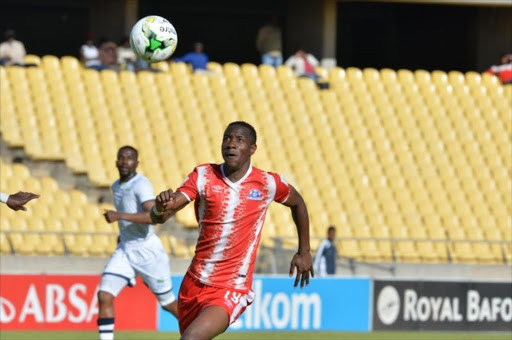 Maritzburg United have again put "not for sale" signs up on their striker Evans Rusike‚ and with the Zimbabwean having recently signed a new contract‚ he is happy to stay there and try to help them to their best season‚ said coach Fadlu Davids.

For a second season in a row‚ United have made it clear that‚ with four days remaining in the transfer window‚ Rusike is going nowhere‚ despite attention from Orlando Pirates and Kaizer Chiefs.

The striker had a mediocre campaign last season‚ after bursting on the scene in 2014-15.

Rusike being tied down‚ and convinced that he can help the club in perhaps their most ambitious season‚ appears to have seen the forward more focused on his game at United again‚ and looking sharp at the start of 2017-18.

Maritzburg have started with three wins and a draw and are poised to reach their first-ever cup final in the MTN8.

"He knows he's going nowhere. We had a chat with him and he knows‚ he's happy here‚ he's signed a new contract now‚" Davids said.

"So there's absolutely no chance before the window‚ from our team‚ from our squad‚ definitely not of Evans Rusike leaving."

Davids‚ like almost every PSL coach‚ said his side will look to make a few more additions before the transfer window closes on August 31.

"I think we will bring one or two. We've identified players. We're busy finalising in terms of the youth we're bringing through‚" he said.

"But ja‚ one or two signings‚ definitely‚ before the window closes."