Trevor Noah opens up to Oprah about his 'badass' mom 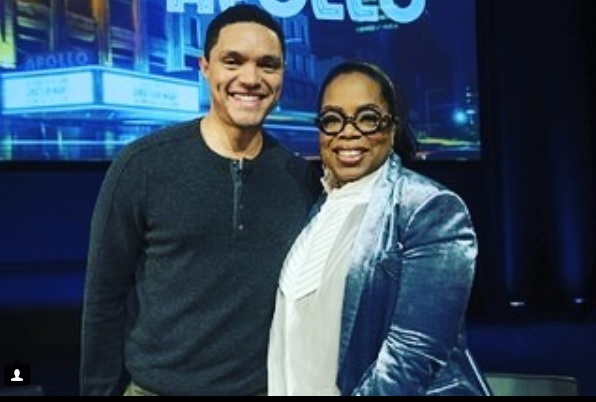 Trevor Noah ticked off another milestone in his life when he bagged a SuperSoul Conversations interview with Oprah Winfrey‚ which aired last night.

In a short video clip which has been uploaded to the Oprah Winfrey Network's YouTube channel‚ Trevor paid homage to his mom and the way she shaped his life.

Oprah started off by commenting on how "badass" his mom was to have stood against the apartheid government and choose to have Trevor‚ even though it was against the law.

"Most people would have a sign to protest government oppression‚ my mother had me. In telling my story and writing this book‚ I never thought it was about my mom. I think most of us believe that we are the heroes of our story and in writing this story‚ I realised that I was my mother's punk ass side-kick‚" said Trevor.

Trevor Noah's mother has voiced her delight at how their story is going to be immortalised.
Entertainment
4 years ago

Trevor added that when he wrote Born A Crime‚ he didn't intentionally set out to focus it around his mom and was simply telling his life story.

"It's funny how when you sit down and you come to realise the people who have shaped you and play a big role in who you are. And I can't deny that my mother was that person for me‚ who stood up in a time when many people were afraid to stand up‚ when a country was being punished for standing up."

Trevor said his mom defied the apartheid system by standing firm on the way she wanted to live her life‚ regardless of what she was told.

"She's the example I lived my life by without realising the consequences. That for me is one of the most gangster human beings you can shape yourself on."

The interview took place a few weeks ago at the Apollo Theater in New York in front of a live audience. It touched on Trevor's memoir and politics in the States.