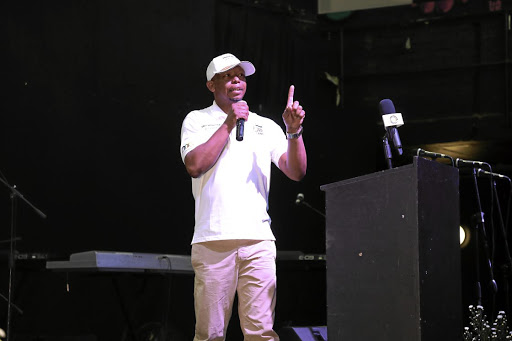 Kwaito veteran Eugene Mthethwa made startling allegations against arts and culture minister Nathi Mthethwa on Friday, insinuating that the minister was planning a hit on him.

Speaking at the fallen Bubblegum music legend Dan Tshanda's memorial service in Newtown, Joburg, Eugene told attendees that he was warned by a friend that his life was in danger and that he must not set foot in Durban, where the ANC was holding its election manifesto, as the minister was not happy with the public comments he made last year.

Late last year, Eugene alleged that the minister was using state funds to illegally fund Tony Kgoroge's organisation, Cultural and Creative Industries Federation of SA, which focuses on artists' rights in the country.

"I'm supposed to be in Durban today but I was tipped that I shouldn't go to Durban because I might be assassinated because I exposed minister Nathi Mthethwa in front of the president. I was telling the truth, I didn't expose him," Eugene told the crowd.

He said that he adhered to the request by his friends not to go to Durban as he still wanted to live in order to deal with "the issues of the industry".

Eugene left the memorial service immediately after his speech and could not be reached for further comment.

Nathi, who was attending ANC's manifesto launch, was not available for comment at the time of going to print.

Eugene made the allegations as Tshanda was remembered with the best of his disco music at Bassline.

Preaching and picture memorabilia could not lift the spirits of family, friends and fans who had packed the auditorium to remember the fallen legend's life. But they all stood up in joy and danced in front of the family when his hit song Peacock from his album Smash was played.

His widow, Sylvia, failed to hold back her tears when their first son, Ndivhuwo, took to the stage to talk about his father.

"He meant a lot to the family and myself, he was a great dad and a great musician, and overall a great person to everyone.

"I have a few words for him because I know he is listening, I just want to say that I love you so much, you mean the world to me and I thank you for being the best dad that anyone could ask for and for striving to make me reach my goals. You never gave up on me and I love that about you," said Ndivhuwo.

Although Sylvia, Dan's wife of 19 years, was not in a state to personally address the crowd, Lufuno, their middle child, read her penned two-page letter.

"My love for Splash music is from young age and we used to dance to songs like Peacock and be happy with family members. little did I know that in one of the good days the very same man will be my personal joy," the letter read.

His friends from Namibia, Botswana, Zimbabwe and the UK all went on stage to say the best they knew about the fallen legend, who died of heart failure in a Joburg hospital on Sunday.

The family's spokesperson Ngwedzeni Moudy Mudzielwana said the funeral would be held on Saturday in Chiawelo.