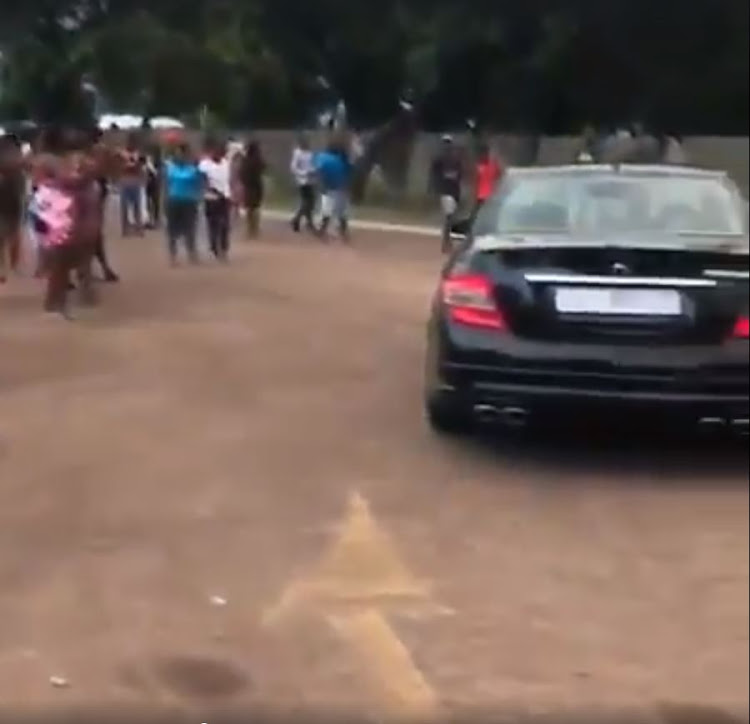 A child arrived at school in a Merceds Benz.
Image: Screengrab

The father of the seven-year-old grade 3 pupil from Pretoria West who was seen on a video posted on Facebook driving a black Mercedes-Benz AMG has admitted to Sunday World that he took the video.

The video, which has since gone viral, shows the little boy in a white vest driving the four-pipe German machine next to a place that looks like a park where he eventually comes to a stop.

People could be heard clapping and cheering as he drove in. In the video you can hear people screaming “Yes bafana, yes nunusa” as he continues revving the engine and one guy is seen approaching the driver’s seat to give him a handshake.

The father also admitted that taking the video was wrong and he didn’t think it would go viral.

“I took the video but I did not post it on Facebook. I have no idea who leaked the video from my phone but I have asked the person who posted it on social media to take it down,” he said. However, the video already has close to a million shares on Facebook.

The father said he gave the boy driving lessons last year.  “I run a car workshop, so I have trained him to do a lot of things there including how to run the business,” he said.

He denied the boy was driving the car to school, but said he was driving it while they were together at the park on that day.

“I now understand that something that was meant to be fun turned out to be a mess, which is why I have moved him to another province.”

A 16-year-old Tshwane boy who crashed during a 168km/h joyride in a 60km/h zone after allegedly taking his parents' hot-hatch without permission will ...
News
3 years ago

Tshwane Metro Police Department spokesperson Senior Superintendent Isaac Mahamba condemned the father’s behaviour, labelling it reckless. He said such actions could lead to the loss of lives. Mahamba  said it was unacceptable for the father to allow a minor to drive his car.

“It is not only an offence to do what the father did, but worse that the driver was a minor without a valid drivers’ licence.”

He said the authorities would take the matter further with the father of the child and he will be liable to pay a traffic fine of R1, 250.