Skolopad opens up about the accident that claimed a man's life 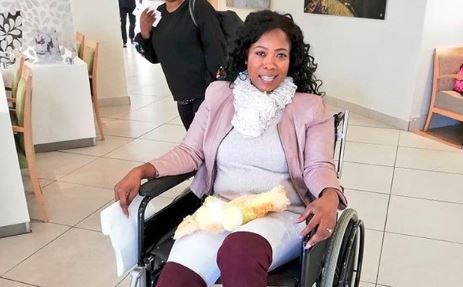 Skolopad is channeling her energy towards healing.
Image: Image: Instagram

Skolopad told TshisaLIVE she was extremely saddened by everything that happened and that while she has been trying to channel her energy towards healing‚ she hasn't been able to get the dead man off her mind.

"It's really sad. No one can ever prepare you for how to deal with something like this. It's not easy and it's so sad but I don't even know what to say because really what can I say? Life belongs to God and he does what he pleases. It was an accident and no one could have foreseen what was going to happen."

Skolopad was traveling with her daughter and two police officers on September 22 when she allegedly lost control of the car and veered onto the wrong side of the road.

The man who died‚ Fred Tlali was buried last Saturday and his nephew Nelson Ntlele told TshisaLIVE that his family was devastated and wants answers about what exactly happened that night.

I shouldn't be alive - Skolopad recovering after car crash

Skolopad was involved in a car accident on Saturday.
News
3 years ago

"I buried my uncle because of Skolopad and she needs to give us answers. My uncle had a wife and many children. What will happen to them now? As a family we will go all the way to find out what happened and those responsible must pay for it because if it wasn’t for the accident my uncle would still be alive‚" he said.

Skolopad said she had no idea what she would say to Fred's family if she was given the chance but said her mother has insisted that they find out where he is from so they can go pay their respects.

"I'm not sure what would be the way to go or where to start, what would be insensitive and like I said‚ what would I say? It's not like I woke up that day and said I want to go be in car accident."

Skolopad and the two police officers‚ as well as‚ her daughter have since been discharged from hospital.

"Incidents or claims that occurred leading up to the accident will be attended to as the investigation continues such the administration issues around this particular incident. That will be in the docket and later presented before the court when the time comes. To say‚ during the incident what happened exactly and why would the police be in the car that belongs to Skolopad. All those issues will be deliberated in court."