Nomzamo Mbatha on graduating: I wore a face of failure for a long time 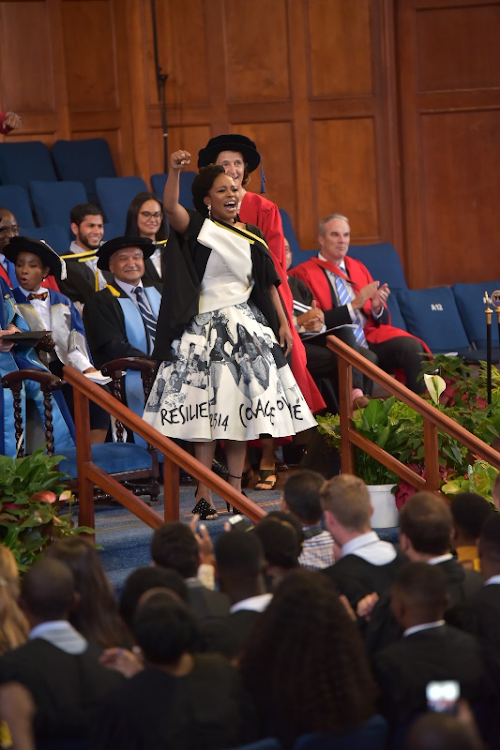 Nomzamo Mbatha received her accountancy degree and attended the graduation ceremony at the University of Cape Town on Tuesday.

Speaking to Metro FM‚ Nomzamo explained what pushed her to continue with her studies‚ even though she was doing quite well in her acting career.

"For the past five years that I have been in the industry‚ every year in January it was so hard for me because there was this thing that reminded me that I had a certain incompletion and dropping out and a certain failure. Despite all the things that I was achieving‚ it just wouldn't go away."

Nomzamo said she didn't want have the cloud of an incomplete task hanging over her and that she had to do it for herself to show that she was capable.

"I felt like I wore the face of failure for such a very long time. I knew the responsibility that I had. I understood the badge I wore and the badge had to have an effect now. For me‚ it was understanding where I am and completing it for myself."

In addition to the fact that she's now a qualified accountant‚ it was Nomzamo's dress that had Mzansi in the feels.

The dress had the South African Depression & Anxiety Group's toll free number printed on it. It also featured pictures of the people that she's lost in her life. She also added the words 'resilience‚ courage and overcome' on the dress.

Here's a look at her sentimental dress:

The reaction from her family members as they saw the dress was heartwarming.

Watch the clip below:

Today is the Third. Carla died on the Third. My dress has the pictures of those I have buried, those who held my heart. To Courage. To Resilience. Overcome. #UCTGrad2018 #RememberThem

As video's of her taking to the stage to be capped surfaced on social media‚ more and more congratulatory messages were streaming in from industry mates and average folks.

Her moment was captured by many in attendance‚ including her "buddy" Maps Maponyane.

It was all so beautiful to watch‚ but it was her iconic 'Amandla‚' with her fist in the air that captured the emotion of the day. After she was capped‚ she paid homage to the late Winnie Madikizela-Mandela.

@NomzamoMbatha
YES YOU DID IT GIRL!!
You’re officially a @UCT_news GRADUATE!

Shoutout to black excellence‚ to the black girl magic and to living up to the legacy people like Winnie Mandela fought for.