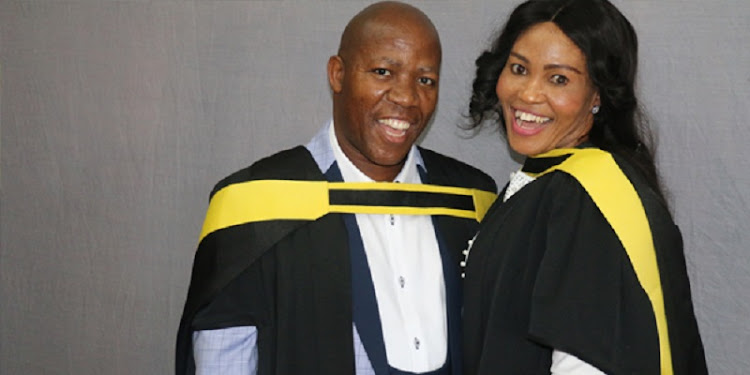 Husband and wife Johannes and Elizabeth Mogotsi‚ both staff members at the University of the Witwatersrand‚ have jointly graduated with Bachelor of Arts degrees.
Image: Wits University

Johannes and Elizabeth Mogotsi‚ both staff members at the University of the Witwatersrand‚ this week celebrated their Bachelor of Arts degrees during same graduation ceremony after successfully juggling parenthood with their studies and jobs.

They're not done with academia‚ despite the commitment and sacrifice - The pair is currently pursuing a Postgraduate Diploma in Management at the Wits Business School.

Johannes Mogotsi hopes to venture into management and believes his “degree is a bridge to a managerial position”. He hopes to study towards a Masters in Management next year.”

Studying together came with a lot of sacrifices for the couple‚ who have two children. His wife Elizabeth says she does not have many friends as she had to sacrifice her social time for her studies and miss out on some family functions. She attributes her success to her strong belief in God.

Elizabeth Mogotsi was spurred on to study by her current job at the Examinations and Graduations Office (EGO) at Wits University‚ as she wanted to fully represent that office.

“Sometimes during graduations‚ I would need to usher in graduands‚ and because I did not have a qualification‚ I could not wear a gown. This did not make sense to me. When I first started at EGO‚ we used to wear gowns and people would congratulate me for graduating whereas I was not. So‚ I felt the need to study so I can get real compliments.”

Elizabeth‚ who last studied in 1993 before registering in Wits in 2013‚ says that studying after so many years was challenging. The pair says that they both set a target to complete their studies together‚ and constantly had to push each other.

Time management was instrumental to reach this target‚ says Johannes.

Johannes works at the Wits Centre for Part Studies as an Administrative Assistant and part of his job entails counselling students. He says was inspired by the number of people who had successfully completed their studies through the centre.

His manager‚ Johan Swanepoel‚ director of the Wits Centre for Part Time Studies‚ commented: “After years of assisting others to realise their dreams‚ he deserved to be offered the same opportunity. He still had to commit and do the hard work himself‚ which he did. The way that he did this‚ was remarkable. He just went about his business quietly and in a determined way. It should be noted that he never failed a single course - which is a wonderful achievement.”

'Village poverty can be hurdled'

Scientist Maphanga is living example how odds can be overcome.
News
4 years ago
Next Article