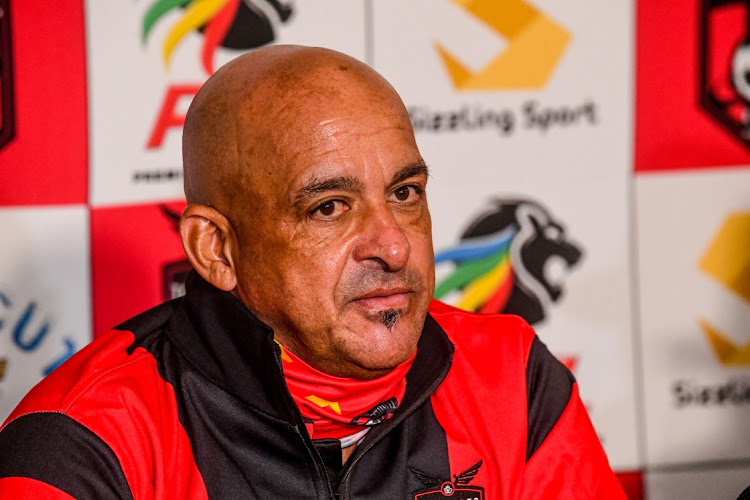 Owen Da Gama addresses the media after being announced as the new coach of TS Galaxy.
Image: Sydney Seshibedi

Without putting any pressure on himself, new TS Galaxy coach Owen da Gama has revealed that he knows what he needs to do to rescue the club from relegation.

He plans to improve the Rockets' position in the DStv Premiership, where they sit in 13th place on the log table.

“I like to come deep in the team, sit down with Tim [Sukazi, the club chair] and sit down with the rest of the technical team, which I have already done, and come up with a collective plan,” Da Gama told the media.

“I cannot just come from outside and start making plans. I have my vision. I got my understanding of what I think should be done. But I think in consultation with the rest of the technical team and management, we come up with the collective plan and say, ‘this is the way forward’.

“I have already picked up on issues we can improve but as I said before, I need to sit down with the technical team, with the players as well. The players are going to play a big role in turning things around as we come up with plans. So they need to buy the whole idea, and they got a hand and a say in moving forward.”

Da Gama also revealed that he was approached by two other clubs, but he was not convinced by their vision. “When you look at the history of TS Galaxy, you can see the ambitions. Winning the [Nedbank] Cup while in the GladAfrica Championship, that’s a great achievement,” Da Gama said. " ... The vision attracted me here.

TS Galaxy owner-chairman Tim Sukazi has turned to experienced Owen da Gama after he named a third coach this season as the Mpumalanga club struggle ...
Sport
9 months ago

Baroka FC coach Matsemela Thoka was lost for words after his side conceded late to see their two-goal lead evaporate in a thrilling 2-2 draw against ...
Sport
9 months ago
Next Article