Now, where were we? Bundesliga restarts amid pandemic 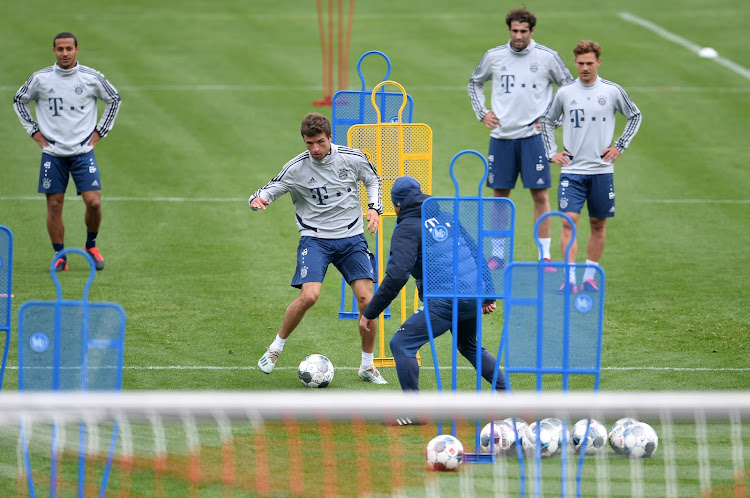 Bayern Munich's Thomas Muller with coach Hans-Dieter Flick during training at the club's Saebener Strasse base in Munich on May 5 2020.
Image: REUTERS/Andreas Gebert/File Photo

The eyes of the sports world will be on Germany's Bundesliga this weekend as it becomes the first "big league" to restart after the COVID-19 shutdown, but little will have changed on the pitch with Bayern Munich hunting an eighth straight crown.

The German Football League decided last week to resume the first and second divisions from May 16 after a two-month suspension, with teams undergoing a seven-day isolation period after testing for the new coronavirus.

Leaders Bayern begin the final nine matchdays with a trip to Union Berlin on Sunday with Borussia Dortmund, four points behind the Bavarians, playing Schalke 04 a day earlier.

"And with the Bundesliga as the only league to be broadcast on TV, I expect we will have an audience of a billion," he told SportBild magazine on Wednesday.

Strict health regulations mean all games will be played in empty stadiums with only some 300 essential staff and officials in and around the arenas.

Players have been told not to spit, celebrate in groups, or touch hands with team mates, while some clubs will use music and cardboard cutouts of fans to enhance the atmosphere at matches.

The league is desperate to complete the season by June 30 for contractual reasons and is aware of the risk of another suspension if there are many positive virus cases among players.

It has already warned of the "existence-threatening" financial situation of several clubs due to the suspension and has warned another interruption would be disastrous for both league and teams.

The interruption has allowed the league's top scorer, Robert Lewandowski, to recover from a leg injury that would have ruled the Bayern forward out of several matches had the season not been halted.

The Pole has been back fit for weeks and will look to pick up where he left off and add to his 25 league goals as he chases the season record of 40 set by Gerd Mueller in 1972.

Dortmund, on 51 points, one ahead of RB Leipzig, have not given up on the title but will restart without injured captain Marco Reus.

Dortmund have the more difficult run-in and Leipzig coach Julian Nagelsmann hopes to give Bayern a run for their money.

"If Bayern are in top form then the title will be decided by them, especially when they have such a lead," he said.

"But we will still try to win this nine-game tournament to create the theoretical conditions to end very high up."

Borussia Moenchengladbach, fourth on 49, and Bayer Leverkusen, on 47, still have to play Bayern but they look almost certain to battle it out for the fourth Champions League spot with Schalke a further 10 points back in sixth.

At the other end of the table, Paderborn's Bundesliga stint looks set to come to an end after one season with the club last on 16 points, six off the relegation playoff spot occupied by Fortuna Duesseldorf.

The 2004 champions Werder Bremen, in 17th place on 18 points, will need to step up a gear if they are to avoid their second relegation since 1980.