Struggling Cape Town City on the brink of a crisis 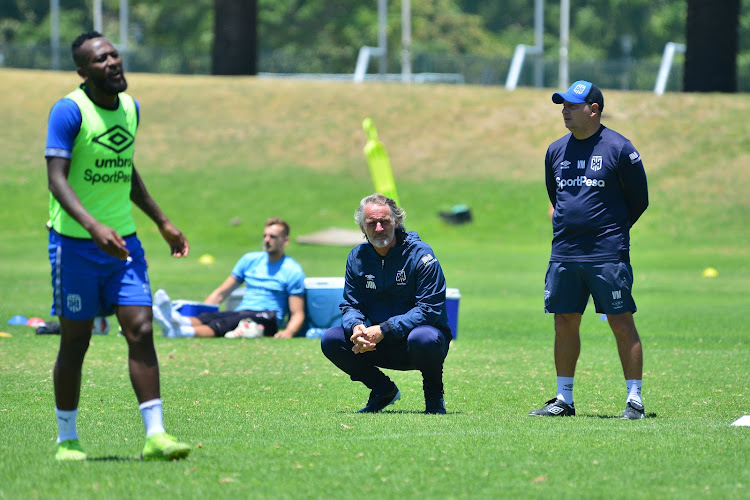 Mpho Makola trains like normal wit the rest of the team despite being banned for six-months for "assaulting a match official."
Image: Grant Pitcher/Gallo Images

Cape Town City are teetering on the edge of a crisis after another home setback saw them plunge to the edge of the relegation zone with little relief in sight.

The 1-0 loss at Athlone on Saturday to Chippa United‚ who were bottom but have now catapulted themselves up the table‚ leaves City on 13 points from 14 games but with just two victories all season against fellow strugglers Polokwane City and Stellenbosch FC.

This is in stark contrast to the last two seasons where they have finished third and fourth.

New coach Jan Olde Riekerink‚ brought into resuscitate the club after a stuttering start to the season under Benni McCarthy‚ has now played two goalless draws followed by the home defeat.

This means City are yet to score a goal since he took over‚ despite a high percentage of the possession on Saturday as the home side looked slick with their passing movements and in their build-up but once they got to the edge of the box were met by a disciplined defence.

Olde Riekerink kept wanting to hammer away at the wall‚ bringing more similarly players in the second half to try inject more pace and width but still meeting with stiff resistance and being unable to properly penetrate.

City played without a recognised forward – Kermit Erasmus was out injured - so could not change their approach‚ not that the Dutch coach would likely do so anyway.

He insisted it was the best performance by the players since he has taken over.

“The way we played was impressive although we didn’t create chances‚” he said.

But City have already had a whole season of looking good going forward but not being able to find the net.

The new coach has changed personnel but not the approach‚ although leaving Roland Putsche on the bench for a second successive game was hard to fathom.

City’s leaky defence now looks largely sorted – although Augustine Kwem’s winner saw Chippa easily slice through the home back four - and with giant goalkeeper Peter Leeuwenburg due back from injury for their next game‚ that department is in much better shape.

But while Olde Riekerink might be enamoured by the technical ability of many of his new charges‚ he has overlooked the fact that their basics -- like crossing and finishing - are poor.

City are next away against Bidvest Wits on Friday‚ December 20 where they hope Erasmus will be back to give them a lift at the end of a year in which their fortunes have plummeted drastically.