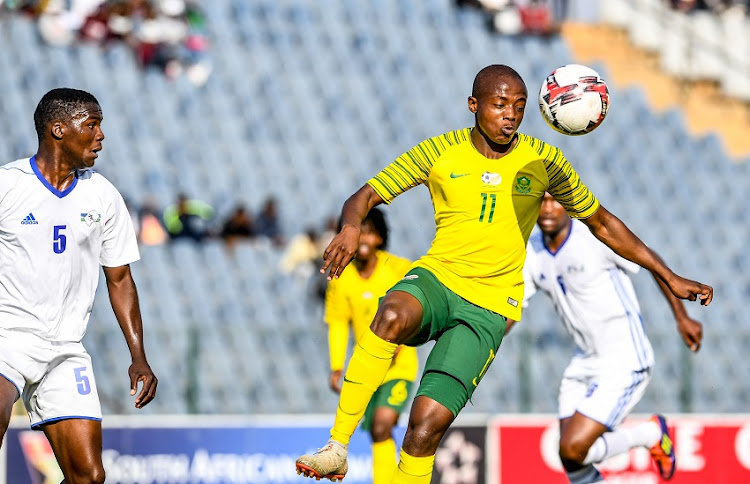 Lerato Lepasa of South Africa and Tshepo Toloana of Lesotho during the CHAN Qualifier 2nd round match between South Africa and Lesotho at Dobsonville Stadium on August 04, 2019 in Johannesburg, South Africa.
Image: Sydney Seshibedi/Gallo Images

South Africa’s hastily assembled squad has been dumped out of the African Nations Championship qualifiers after a 3-0 defeat to Lesotho at the Dobsonville Stadium on Sunday saw them lose 6-2 on aggregate.

There was a first cap in four-and-a-half years for unattached midfielder Reneilwe Letsholonyane, and debuts for goalkeeper Andile Mbanjwa and defender Nyiko Mobbie, but South Africa always looked second best against a well-drilled Lesotho outfit.

Winger Jane Thaba-Ntso scored a brace of goals for the visitors, whose superior international experience shone through and, after a 25-year wait, they now have two wins in as many weeks against Bafana Bafana.

Not that the home side resembled anything like a national team except in name, as coach David Notoane was forced to scramble around for players in a fixture that clashed with the opening weekend of the domestic league campaign.

That had seen a recall for 37-year-old Letsholonyane, who may not have a club, but has received an extra international cap to take his tally to 55.

University of Pretoria midfielder Kgodiso Monama had a shot midway through the first half that forced a good save from Lesotho goalkeeper Monaheng Ramalefane, but otherwise there was little to enthuse over for the South Africans.

Trailing 3-2 from the first leg in Maseru last weekend, they needed only a 1-0 win to advance on the away goals rule, but fell further behind when Thaba-Ntso, who has been watched by a number of PSL teams in the past, put Lesotho ahead.

The tie was made safe after 69 minutes when Thaba-Ntso added his second, and Lesotho added to the humiliation with a third in injury-time as Hlompho Kalake netted.

South Africa had been hoping to use the CHAN qualifiers and finals tournament as preparation for the Olympic Games next year, if they qualify, but with Notoane unable to select anything like his regular Under-23 side, there will be few tears shed at an early exit.