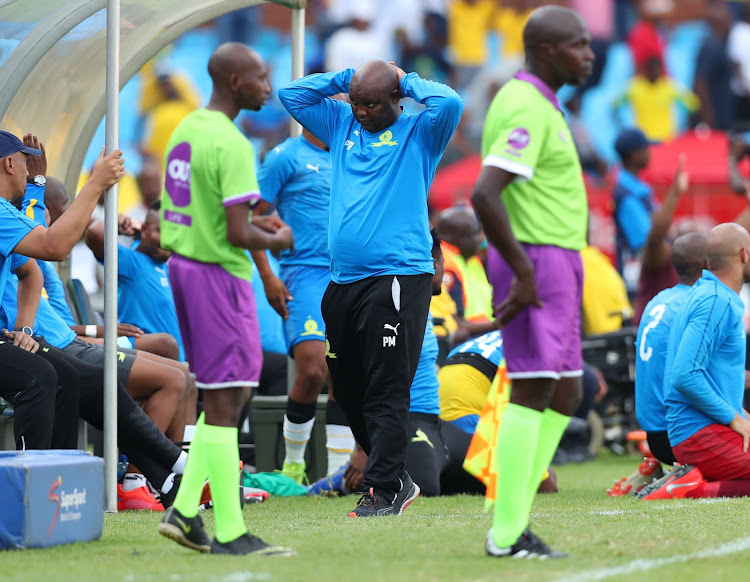 Mamelodi Sundowns coach Pitso Mosimane doesn’t want to focus on things he can’t control‚ saying that if the Premier Soccer League (PSL) deducts three points from his team as a result of the Wayne Arendse saga‚ so be it.

The PSL confirmed on Wednesday the guilty verdict for Absa Premiership leaders Sundowns for fielding ineligible Arendse in a 1-1 league draw against Bidvest Wits last year.

“They’ll probably take our point but I don’t know if Wits will get three points. If they get it‚ so be it‚” said Mosimane on Thursday as the Brazilians prepared to take on Al Ahly in the first leg of their hugely-anticipated Caf Champions League quarterfinal on Saturday at Lucas Moripe Stadium in Atteridgeville.

“I don’t want to worry much about what I can’t control by saying‚ ‘Why now or why me?’

“I spoke about this issue on Monday after the Pirates game at Orlando Stadium and something came up. Maybe I must always speak about these things.”

Mosimane said he had challenged his players to try to win their seven remaining PSL games so that they are not affected by external factors.

“Sundowns must just win all their remaining games so that this thing doesn’t work‚” he said.

“I have challenged the players to win all the games because I know they can. It is motivation for us and it was motivation last year.”

Though Sundowns have been found guilty in the Arendse matter‚ the PSL said that the sentence is yet to be made‚ and Mosimane is not impressed by the further delay.

“AmaZulu were fined [having six points deducted this season] for whatever they did because Fifa made a quick decision in Zurich‚” he said.

“And we [the PSL disciplinary commitee] can’t make a decision on Wayne Arendse who is in front of us. Come on.

“If you have to lose the league because of docked points it’s okay – at least we would have given it our best on the pitch.”

Mosimane has alspo been found guilty on a charge of misconduct for assaulting AmaZulu security official Satchmo Ngwenya by punching him in the face in Downs’ 3-3 draw at King Zwelithini Stadium on September 16‚ but he maintains his innocence.

“I don’t want to talk much about that. It is important to keep quiet because the guy spoke who I am supposed to have assaulted‚ and has given his opinion. The guy doesn’t say that I assaulted him‚ so what am I being charged for?” Mosimane queried.

“Before I get punished to the stands [banned]‚ I must have beaten someone first. The guy must say that‚ ‘Pitso beat me’‚ and I must go to the stands.

“It was a televised game‚ so where is the footage because SuperSport has about 18 or 16 cameras inside the stadium?

“Are you telling me that no-one picked it up? you can’t miss it with all those cameras and hopefully we will find that footage.”