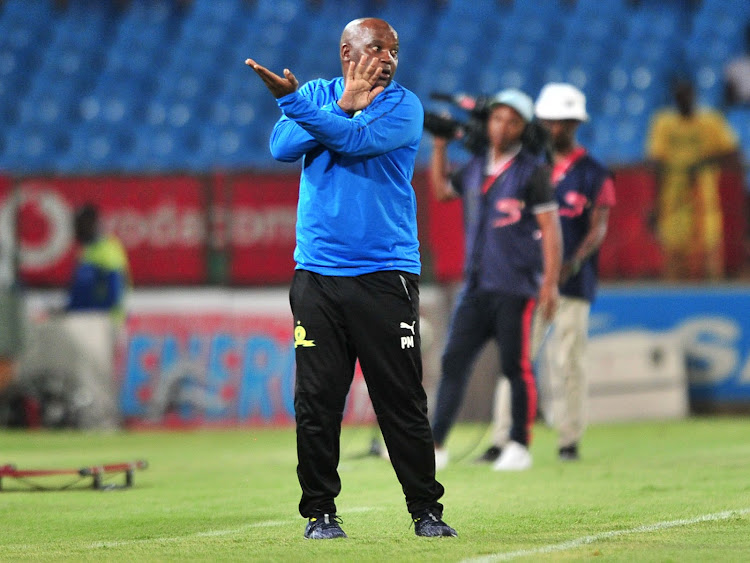 The Brazilians beat Cape Town City 3-2 at Loftus on Wednesday night to ascend to the premiership summit for the first time this season and Mosimane is happy to be back in the now familiar position.

“I don’t know if this situation is an advantage for us but we must apply our experience because we have been there before‚” he said‚ adding that their next match against Bloemfontein Celtic is crucial for them to stay top of the pile.

“Normally when we are there at the top‚ we don’t come back.

"I hope that we draw from the experience we gained last season but we will see what happens in our next match against Bloemfontein Celtic and I hope they don’t disturb us.

“The other big one is the return leg against Cape Town City in Cape Town next week.

"You know they will never allow us to score three goals there‚ it is going to be a tight one like our game against Bidvest Wits and I hope there is no red card.

"Maybe we will nick it away from home but in some games like the one against Wits‚ I told you guys the point away to them is big.

"When we went to FNB Stadium this year‚ that game was big for us and people were surprised with the way I celebrated.

"Most are still going to pass there at FNB‚ Cape Town City still has to play Wits and they must cancel each other.

"Somebody must drop points.”

Mosimane was satisfied with the convincing manner in which his charges dealt with City who have often given them problems in the past.

“I have never really seen a big upper hand on them like we did (on Wednesday) and we also scored three goals.

"Even when we had Khama Billiat and Percy Tau we never outplayed them like this.

"I am happy that we are managing big games like the ones against Chiefs and Wits.

Sundowns went into the clash on the back of two successive draws against Polokwane City and Bidvest Wits where they shot themselves in the foot with costly mistakes.

Mosimane admitted that he was worried when City equalised through a penalty.

“To be honest‚ at some stage I said to myself here we are tossing it again because we did so against Polokwane City and Bidvest Wits with mistakes‚" he said.

"I was thinking that this is going to be the third game in a row. But fortunately we scored the second one from nowhere and it was a good finish by Anthony Laffor.

“I put him in the starting line-up and sometimes I get it wrong by leaving him out and he scored a brilliant goal.

"But the most important goal for me was the ball that Themba Zwane passed to Phakamani Mahlambi in the dying minutes.

"I thought Mshishi (Zwane) will go for glory but he played for the team and you can see that it could have been different because Kermit Erasmus after that.”