SuperSport will play a calculated second leg against Chiefs 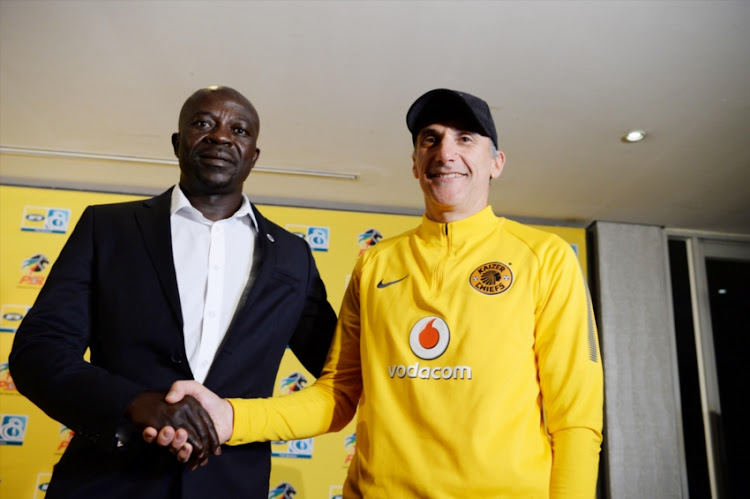 The fact that SuperSport United have to score away against Kaizer Chiefs in Saturday night’s MTN8 semifinal‚ second leg clash at FNB Stadium won’t make them to be reckless in their approach to the game‚ according to coach Kaitano Tembo.

The tie (kickoff: 8.15pm) is locked at 2-2 after the exciting first leg in Pretoria last weekend and even though SuperSport will be looking for an early goal to unsettle Chiefs‚ Tembo said they will not move away from their usual processes.

“We have to be patient‚ try to play our normal game and defend and attack as a team‚” he said as his team readied for the short trip over the Jukskei River.

“You saw what happened last weekend – it was not an easy game because we threw everything at each other. It is not going to be any different because Chiefs are a good attacking side and we are aware that we have to score.

“There is no two ways about it and I hope we create early opportunities to get an early goal that will put us in business.”

He is likely to ring changes to inject fresh legs and experience against Chiefs‚ who managed to score two away goals last weekend.

“I am happy that Grobler has been selected to the Bafana Bafana squad‚ he is an important player for us‚” Tembo said.

“He came through a terrible injury and last weekend against Chiefs was the first time he played 90 minutes in a long time. I did not want to play him against Chippa‚ because I didn’t want to destroy him because he has not yet regained full fitness.

“He will play again on Saturday and you saw that I had the likes of ‘Yeye’ [Letsholonyane] and Thuso on the bench because we want to have fresh legs on Saturday.”

On the Chippa win that pushed United to third place on the log with nine points after four matches‚ Tembo said he is happy with the strides being made.

“I am happy with the progress. It is not easy because of what we went through last season where we were nearly relegated.

“We are working for each other‚ the attitude of the players is good and we are grinding results. This was our second game in three days and we knew it was not going to be easy against a well rested Chippa United.

“We played in phases‚ we had a very good start and scored but after that we lost momentum and they started to dominate until they got the equaliser.

“We stepped it up again after their goal and scored the second goal but you could see that we were fighting.”