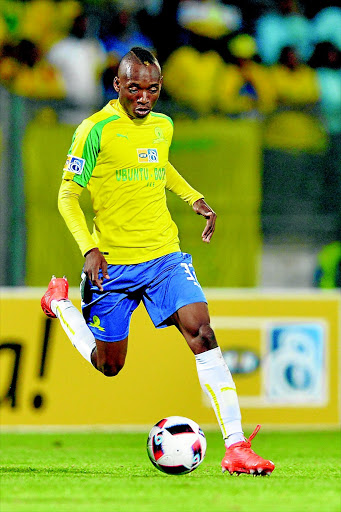 Mamelodi Sundowns forward Khama Billiat has admitted that he has slowed down but he was quick to point out that persistent rumours that he's wanted by overseas clubs don't distract him.

The Zimbabwean international, however, insists he can do better, especially as he is expected to play a starring role in the Tshwane derby clash against SuperSport United at Loftus Stadium tonight (6pm).

"I don't believe it has to do with my performance... Even last season, there were moments when it looked like I was going to leave the team. I didn't and I still kept on going," said Billiat, who has linked with clubs in France and Egypt.

Billiat has made 20 appearances, found the back of the net five times and has four assists this campaign.

"I also want to see him [the Billiat of last season]. I just need to work a little bit more harder like my coach [Pitso Mosimane] has been saying," he said.

Sundowns have gone five matches without a win in all competitions ahead of the Tshwane derby. Billiat, though, insisted that it has nothing to do with fatigue, considering the amount of games they have played lately.

"Fatigue is always going to be there, but you can always win games if your mind is right.

"We've been looking for a turnaround; to bring back the Sundowns that everyone knows," he added.