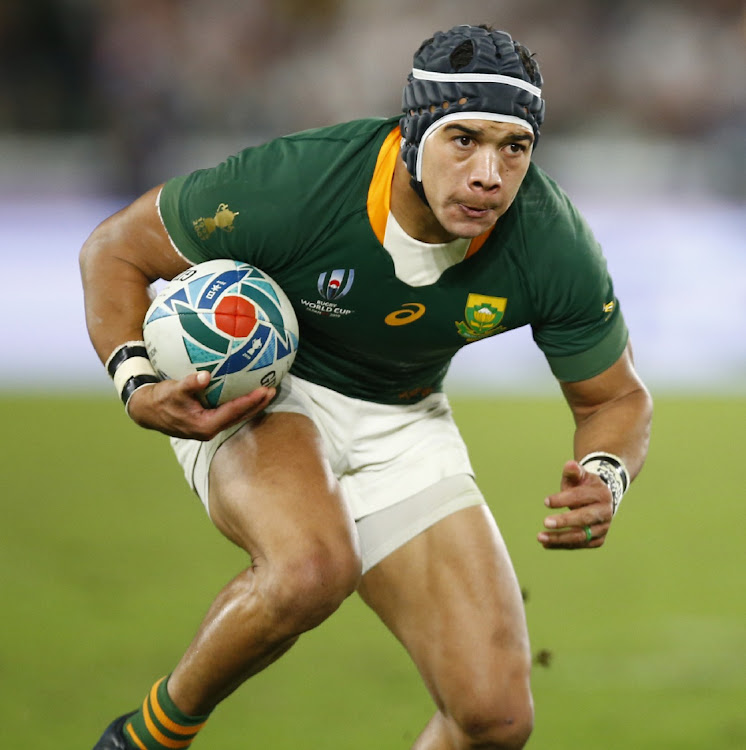 Cheslin Kolbe, here in action in the Rugby World Cup final in 2019, may have to miss Sunday's clash against the Wallabies. Photo by Steve Haag/Gallo Images
Image: Gallo

Star Springbok wing Cheslin Kolbe is an injury doubt for Sunday's Rugby Championship clash against the Wallabies in the Gold Coast.

Kolbe suffered a blow to the leg in training last Friday and has not trained with the team since, but an 11th hour decision on his availability will be made before the team is announced on Wednesday.

Assistant coach Deon Davids stressed the injury to the player who has the habit of fashioning tries in big games was not serious.

“ All the players, except Cheslin Kolbe who got hit on the leg, are available. He (Kolbe) was sent away by the medical staff for treatment and assessment. It is nothing serious. Hopefully he will be ready as soon as possible.

“They are busy with his assessment and we'll make a decision later on [Tuesday] or Wednesday about his availability.

All the injured players are back on the training field.

“All the injured players are back on the training field. We had a very hard week last week,” said Davids.

With the rest of the travelling group fit, the Boks are in a position to press No 8 Duane Vermeulen, prop Trevor Nyakane and scrumhalf Faf de Klerk back into action.

They will need all their best hands on deck to snap their winless streak on Australian soil. The Boks have failed in their last five attempts, with a draw in Perth in 2017 the closest they've come to victory.

They need no reminding of their recent record.

“Historically we don't have a good record in Australia,” acknowledged Davids.

“We are quite focused to carry on where we left off. We have a lot of areas of our game we still want to improve.

“Australia are a quality side. They are very well coached and are competitive. I won't look too much at their results in the last few games. Five out of last seven games were against the All Blacks and two were at Eden Park.”

Davids made the point that when young players are regularly exposed to the furnace the All Blacks bring to the game, they will be battle-hardened before long.

“They can only get better. Players will learn lessons and the team will grow.”

Davids noted the Wallabies created many scoring opportunities against the All Blacks last Sunday, but their execution and decision making let them down.

He believes Dave Rennie's team will show the same enterprise and intent with ball in hand this weekend.

Australia is a quality side

“From my past experience coaching against Dave Rennie, when he was at Glasgow Warriors and the Chiefs, that is part of his approach. He has an attack philosophy and he likes his teams to play with ball in hand and build pressure with the ball.

“Their attack has improved but I also think they will look back at their execution and decision making wasn't as good as they wanted it to be. They will look at it and try to correct that. Maybe tactically just adapt. They will have the same approach,” predicted Davids.

He wasn't overly concerned that his team are likely to face a crowd for the first time since the Rugby World Cup final of 2019.

“Our players are really excited about playing in front of a capacity crowd again. It is obviously something we will have to adapt to again, especially in terms of communication on field. We spoke about it, the things we have to work around. It will be fantastic to play in front of a big crowd. Hopefully that will spur the guys to perform even better.”