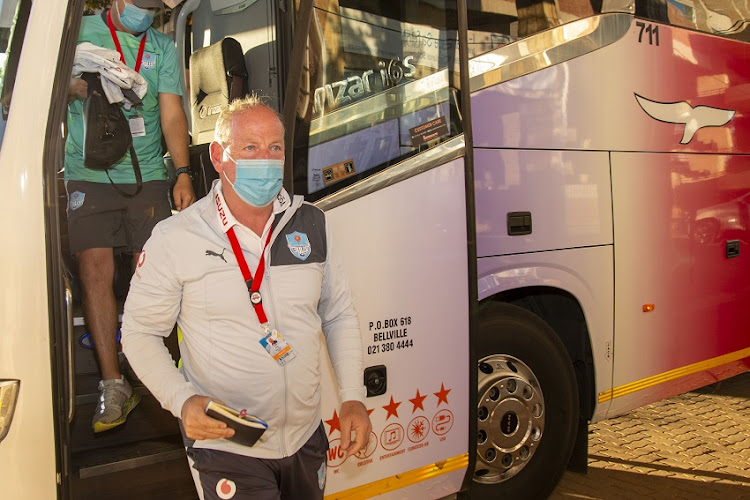 Jake White, Head Coach of the Vodacom Bulls arriving at the stadium during the Super Rugby Unlocked match between the Toyota Cheetahs and Vodacom Bulls at Toyota Stadium on October 16, 2020 in Bloemfontein, South Africa.
Image: Gallo Images/Getty Images

The Super Rugby Unlocked match between the Bulls and the Pumas is set to go ahead as planned at Loftus on Saturday.

There were fears that the match would be cancelled after the Covid-19 cases in the Pumas camp‚ but Bulls coach Jake White said on Thursday he's been made aware that the Mpumalanga side trained with a full-strength squad this week.

“[This is the] feedback I have got and I can only tell from talking to our president and chief executive officer. The Pumas guys that were in close contact with those who were positive will get tested on Thursday.

"The way that I read this is that the game is on‚ it just depends on whether they (Pumas) have access to the players who were in isolation to be part of the match 23.

“If not‚ they have 23 players that can come to Pretoria on Saturday and it will depend on whether they have the luxury of getting some of those guys who have been in isolation or not.

"I repeat‚ those guys who were in isolation did not have Covid-19 but were in close contact‚ and they therefore had to isolate for ten days.

“They are going to be re-tested and if they test negative‚ they will all be in the team and on the bench for Saturday against us. As far as I know they have a squad of 23 players that has been training for the whole week‚ even if those guys who have been in isolation are not available for the weekend.”

White has handed a first start to Chris Smith at flyhalf due to the unavailability of Morné Steyn‚ who is following Covid-19 protocols after he was exposed to a family member recently.

“Morne has Covid-19 protocols to follow and we are just not risking him‚ so Chris gets to start there. He has been on the bench all the weeks anyway‚ so it will be good to see him start.

"Morne was in close contact with a family member and the reality is that he is going to test again on Friday. Rather than put him halfway in and halfway out‚ we decided to leave him out completely and keep him going with someone else.”

Springbok flank Arno Botha comes in at flank with Elrigh Louw dropping out of the match-day squad among the forwards while Corniel Els starts at hooker with Joe van Zyl on the bench in a direct swap.