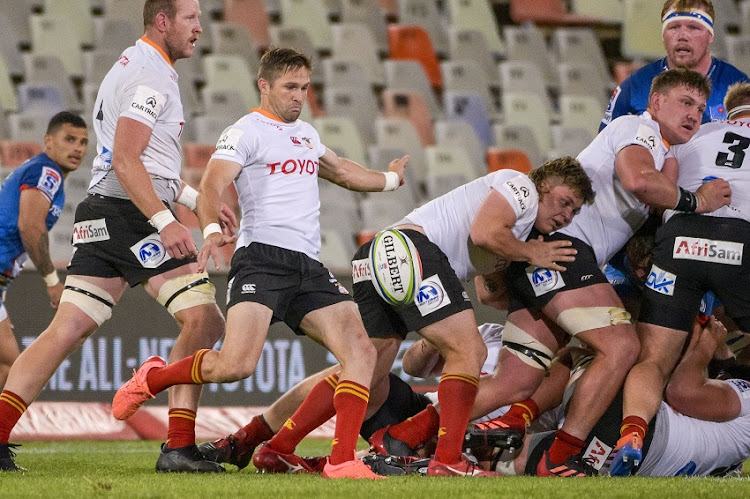 The more incisive, and ultimately decisive Cheetahs kept the Bulls at arm's length for large chunks of their Super Rugby Unlocked clash in Bloemfontein on Friday night.

The Cheetahs offered more on attack and were more resolute in defence to eke out their second win of the campaign but all their good work almost came to nought as the Bulls rallied late in the game.

A 78th minute maul try got the Bulls to within two points but Chris Smit missed the conversion that would have earned his team an improbable draw.

The Cheetahs earned this win in a manner that stands in contrast to their victory over the Pumas last week. They were unshackled and were able to explore the wide open spaces in last weekend but this was always going to be more of an arm wrestle.

Poor discipline, particularly in the middle part of the second half conspired against the Bulls as the soft penalties pinned them on the back foot.

They again made a pedestrian start. Last week they were frustrated at the ruck by a team that committed more numbers to the breakdown. This time they were up against a team far more adept at hanging on to possession for longer periods.

The Cheetahs probed up the middle, often with loose forward Andisa Ntsila who proved a powerful and persistent ball carrier. He took some putting down as did fellow loosies Jasper Wiese and Junior Pokomela.

The opening four minutes produced hyperventilating stuff with both teams having a full go at the defensive lines. Both sides carried the ball with gusto but that was never going to last.

In that period Bulls fullback Gio Aplon jinked his way though the Cheetahs' defence before he was decked by a Clayton Blommetjies tackle. Blommetjies, playing in his 100th game exacted the steal and to ad insult Aplon was injured and was forced to leave the field.

Another veteran, Cheetahs captain Ruan Pienaar also left the field early but with an even more sinister knock. The initial prognosis is that he had injured his MCL which could mean a lengthy period on the sidelines.

Despite edging the Cheetahs in the vital stats at the break, the Bulls found themselves behind on the scoreboard. The Cheetahs however were more incisive when they had possession and the second half followed a similar theme despite the Bulls returning from the break with renewed vigour.

Flanker Marco van Staden grew more influential but the Cheetahs in that initial period after half time break repelled the Bulls' advances.

Their defensive lines held firm and it served the dual purpose of drawing energy from the Bulls effort while increasing the visitors' levels of frustration.

Increasingly the Bulls were drawn to folly and Cheetahs flyhalf Tian Schoeman either handed his team territorial advantage or advanced the scoreboard from it. Lock Ruan Nortje's yellow card could have come as a terminal blow in the 62nd minute but the Bulls regrouped well to limit the damage.

In fact, they advanced the scoreboard to get within seven points and by the time Nortje returned they were back in the game. Joe van Zyl's maul try brought them to within touching distance of a draw but instead the Bulls left Bloem with a defeat.