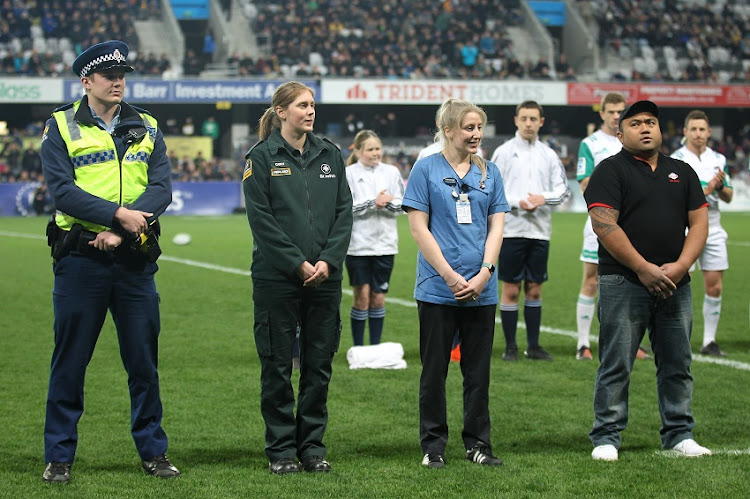 Essential workers look on before the round 1 Super Rugby Aotearoa match between the Highlanders and Chiefs at Forsyth Barr Stadium on June 13, 2020 in Dunedin, New Zealand.
Image: Teaukura Moetaua/Getty Images

Rugby’s return last weekend after its suspension in mid-March was an occasion cherished by those who witnessed it. The Highlanders and the Chiefs went full throttle in a humdinger before the Blues and the Hurricanes contributed to the spectacle on Sunday.

But what did we learn from Super Rugby Aotearoa’s opening weekend?

Almost predictably with the referees told to ensure quick ruck ball and speeding up the game‚ the players struggled to come to grips with the interpretations at breakdown as well as the offside line.

Eleven of the 28 penalties in the Highlanders v Chiefs match were for the ball carrier not releasing the ball. Equally‚ players are also yet to fully grasp the concept of rolling away after a tackle‚ entering the ruck through the gate and not shooting prematurely out of defensive alignment.

Instead of pointing fingers at the officials for being pedantic‚ there is general agreement the players need to clean up their act.

Drop goals‚ so long ignored as a potential weapon found a way back into the Kiwis’ collective consciousness. It took an addition to their competition rules to bring it front of mind.

They have introduced a 10-minute golden point extra time period if scores are level at full time has teams practising drop goals. It is a skill that was clearly honed and it was there for all to see on Saturday first through Damian McKenzie and then‚ tellingly Bryn Gatland.

With so much interest in the build-up to the tournament players generally warmed to the challenge of getting themselves into shape. In the case of star back Beauden Barrett‚ he took it a notch further by setting new training field benchmarks.

It is widely thought that players need a six to eight weeks as a lead up period before they play their first competitive match after long lay-off. Ideally a practice match should also be played before players go into full combat competition mode but time restrictions and availability may prove obstacles.

Apart perhaps‚ from the Blues the four teams on display on the opening weekend held up well.

Having a ball‚ again

Those who didn’t make it to the matches made sure they watched it. Pay channel Sky TV announced a combined 750‚000 New Zealanders watched the Highlanders v Chiefs and Blues v Hurricanes games in Super Rugby Aotearoa‚ as well as the Warriors-Cowboys NRL game in Australia on Friday night.

According to stuff.co.nz Sky’s The Breakdown show reported on Tuesday night that the Super Rugby figures represented a 91 percent increase on the average audience.

Playing to the crowd

With their Covid-19 infection curve flattened New Zealand were able not just to open their economy but fans were allowed to attend matches. It was proved again that watching games with a crowd in attendance stirs something in the soul matches without people cannot.

Having a live audience is what helps create sporting theatre. The Bundesliga‚ La Liga and the Premier League can assemble their galaxy of stars but in front of empty stands they just don’t shine as brightly.