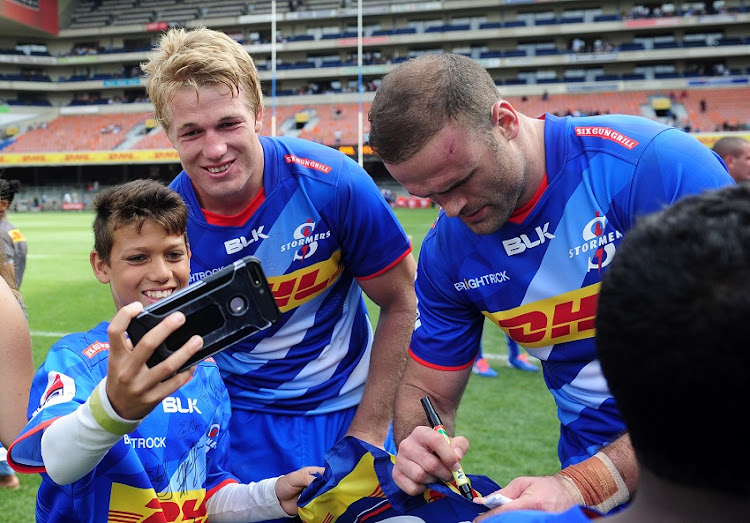 Pieter-Steph du Toit of the Stormers poses for a photograph with a young fan after the 2020 Super Rugby game between the Stormers and the Hurricanes at Newlands Rugby Stadium in Cape Town on 1 February 2020.
Image: © Ryan Wilkisky/BackpagePix

Such has been his sheer physical impact in recent seasons‚ it is perhaps unsurprising that Pieter-Steph du Toit has had trips to the emergency room.

The star flanker‚ who is the world player of the year through his range of on-field influence for the Springboks‚ nearly lost a leg following a recent Super Rugby encounter for the Stormers at Newlands.

Quick reactions from the medical staff however prevented catastrophe.

“He had a medical emergency after the Blues game‚” said Stormers team doctor Jason Suter. “He had a haematoma that developed into an acute compartment syndrome.

“It’s incredibly rare – there have been only 43 [cases] listed in the literature [worldwide]‚” said Suter.

“It’s a medical emergency because if you don’t pick it up early they lose blood supply to the leg and they lose the leg. Within 15 minutes of him coming off the field and assessing him‚ we realised that he was at risk of this particular rare condition.

“He was taken straight to Vincent Pallotti [Hospital] where he had a vascular surgeon waiting and he was operated on that night.

“It’s very unusual‚ very rare but they had to cut through the muscle to release the pressure and they were only able to close that leg 10 days after his initial injury.

“He is recovering well and we expect him to be back‚ based on the surgeon’s report‚ at around three months.”

Stormers coach John Dobson lauded the efforts of the team doctor. “Doc deserves enormous credit for Pieter-Steph. Had a rugby player lost his leg it would have been devastating for the game.

“And if it wasn’t for the timely intervention then‚ I think [he could have lost a leg]. Almost half of the 43 reported cases had resulted in that.”

The tieless flanker who was a willing and able workhorse for the Boks had played himself to a near standstill and required specialised treatment after one of the matches. To help relieve the stress on his fatigued body he was exposed to acupuncture but the treatment brought unintended consequences.

The indestructible Du Toit however made a full recovery and made a telling contribution to the Boks’ ascent to the top of the world order.