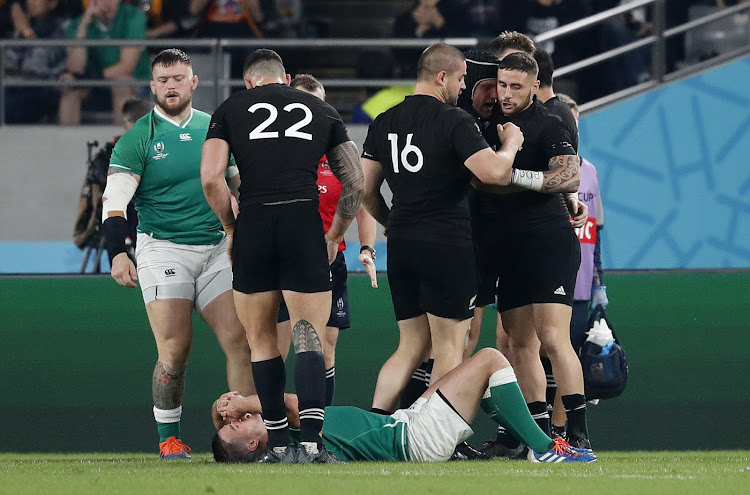 The All Blacks surged into the Rugby World Cup (RWC) semifinals with a display of poise‚ power and precision here on Saturday.

They thoroughly vanquished Ireland 46-14 to set up a meeting with England here next Saturday.

The last time the teams met in a RWC semifinal was when Jonah Lomu pulverised England in a 45-29 victory for the All Blacks at Newlands in 1995.

Ireland came into this tournament with expectation. So did the throngs of Ireland fans who made it this far east. They had failed to beat the All Blacks in their first 28 meetings but before this clash had won two of their last three matches.

It was‚ however‚ clear by the 20th minute of this clash that New Zealand were going to be too strong. By then the All Blacks had run into a 17-0 lead and looked entirely untroubled as Ireland went from one blunder to the next.

The All Blacks displayed greater attacking threat than they did in Yokohama against the Springboks‚ although on that occasion the team in green were far more stout in defence.

Still‚ when the All Blacks did go on the offensive here on Saturday‚ they did so at breathtaking speed and with the precision of a surgeon.

They cut Ireland to shreds. In their defence‚ Ireland had both centres‚ Rob Henshaw and Garry Ringrose‚ off the field for chunks of the opening half hour. Ringrose only returned in the 27th minute but by then the All Blacks had exploited the gaps.

Elsewhere‚ and exasperatingly so for the Irish fans‚ their team’s handling left a lot to be desired while their lineout was at times under siege. When Ireland’s brains trust left out beanpole lock Devon Toner from their RWC squad‚ it wasn’t well received. How they could have done with his towering presence here.

On the whole Ireland were far from the wholehearted team that beat the All Blacks last year. In fact‚ there was a hint of hesitation to what they did and that lack of conviction permeated their game as the All Blacks grew more emboldened.

The All Blacks were far quicker on the draw as was evidenced in Aaron Smith’s first and Beauden Barrett’s tries.

So little did Ireland have to cheer about in the opening half that they vaguely cheered Richie Mo’unga’s failed conversion after the All Blacks ran in their third try.

Ireland did show more fight before the break but got no reward. It was only when Rob Henshaw crashed over under the sticks in the 69th minute that they had something to smile about. By then‚ however‚ the All Blacks had another potential conquest on their mind.