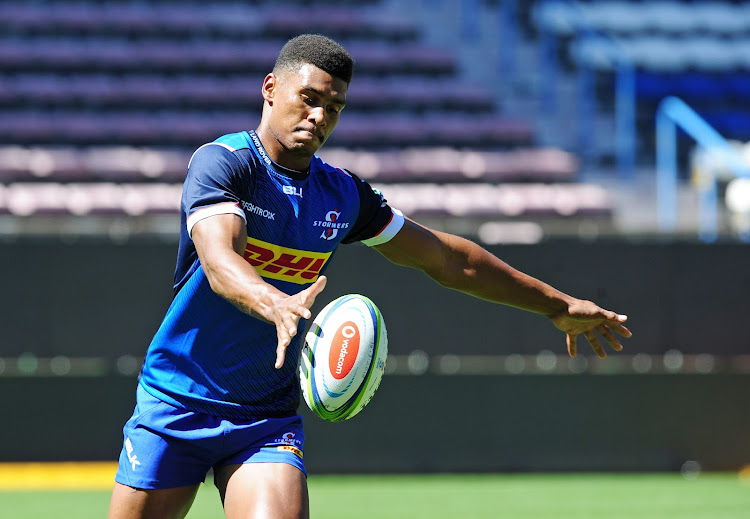 Damian Willemse of the DHL Stormers during a training session at Newlands Stadium in Cape Town on April 14 2019.
Image: Ryan Wilkisky/BackpagePix

The austere financial times South African rugby clubs face has been highlighted in recent weeks with the news of some high profile players taking up short-term overseas contracts.

Stormers starlet Damian Willemse‚ who just missed out on Rugby World Cup selection after a knee injury set him back‚ has signed with Saracens in England on a three-month deal.

Bulls and Springbok prop Lizo Gqoboka‚ another player on the fringes of the Bok World Cup squad‚ also revealed he would play at Montpellier in France for the next few months.

Stormers and Bok prop Wilco Louw is another on a similar deal‚ this time with French club Toulon.

These are just three examples of unions happy to let prized assets go and earn their wages in the northern hemisphere at a time when there is no domestic rugby in SA.

WP are cash-strapped and are losing players to overseas and local clubs on a regular basis.

Removing Willemse‚ one of the highest-paid members of their roster from their wage bill for three months‚ helps WP to alleviate some of the financial strain they are under.

The flip side is that often loan deals end up becoming permanent moves. Robert and Dan du Preez are an example – both taking up loan deals with the Sale Sharks‚ and within nine months moving permanently.

“We’re grateful to Western Province for allowing Damian to play his rugby at Saracens for the next three months‚” Saracens Director of Rugby Mark McCall said. “He is a young talent and we’re looking forward to welcoming him to the club.”

There is an upside for players‚ as they gain valuable experience in another league‚ but it also comes at the cost of missing out on an off-season.

In Willemse’s case‚ injury cost him two months of the year anyway‚ so he was forced into rest.

But Gqoboka‚ in particular‚ has endured a heavy workload this year as a permanent member of the Bulls team in Super Rugby and the Blue Bulls in Currie Cup in addition to being part of the Boks’ Rugby Championship squad.

“I am very excited to start this new adventure in Montpellier‚” Gqoboka said. “I spoke with some club players who are very happy here. I look forward to taking my bearings and getting to know everyone.

“The Top 14 is a great championship that brings together many experienced international players. There are also many young talents who can learn from them.

“My personal goal is to contribute as much as possible to the success of the club. Everyone always has something to contribute‚ both on the ground and outside‚ trying to be a better person‚ helping people and bringing a positive attitude.”