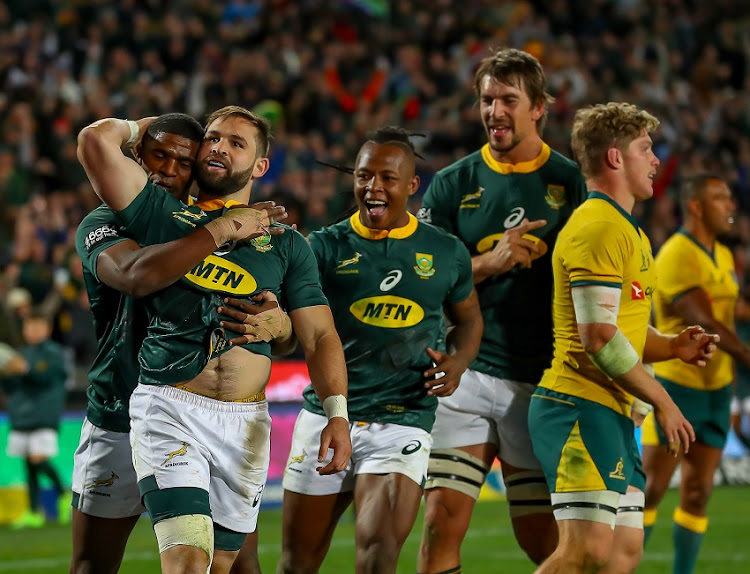 Springboks congratulate Cobus Reinach of South Africa after scoring his try during the The Rugby Championship match between South Africa and Australia at Emirates Airline Park on July 20, 2019 in Johannesburg, South Africa.
Image: Gordon Arons/Gallo Images

The Springboks could not only give themselves a boost before the World Cup in September if they beat the All Blacks in Wellington on Saturday‚ but also deal a huge mental blow to the reigning world champions.

And not just a psychological setback before their September 21 Pool B clash in Yokohama. If the All Blacks lose on Saturday they could be dislodged from the No 1 world ranking with Wales moving to top spot.

Of course‚ the world rankings are skewed at various times of the year when one of the hemispheres is inactive. In February and March the southern hemisphere teams tend to lose ground while the Six Nations takes place‚ while the reverse is true during the Rugby Championship.

For the All Blacks to be knocked off No 1 this weekend‚ the Boks would have to win by 15 points or more. That is highly unlikely‚ but even a defeat would leave the All Blacks vulnerable to losing the No 1 ranking next week if they lose to Australia as well.

If it happens Wales will surely take the top ranking with a pinch of salt. But for New Zealand it would be a deep mental blow because they have been No 1 for three months shy of a decade.

For an entire generation of players‚ being the world’s best team statistically and by ranking has been a given. It’s almost seen as a birthright.

For the All Blacks to arrive in Japan in defence of the Webb Ellis Cup as the No 2-ranked team in the world is unthinkable. Since 2007 the All Blacks have gone into every World Cup ranked first.

Neither side are likely to be focused on the world rankings as they set their sights on the immediate task of a massive challenge that will give a much better indication of how they are set so close to RWC 2019.

Neither the Boks nor the All Blacks were at full strength during last week’s Rugby Championship first round and both won‚ in differing circumstances.

An experimental All Black side managed to repel a full strength Pumas in Buenos Aires with a brilliant defensive display. The 20-16 win was one of character and grit over flair.

The Bok team who were a mix of first choice and fringe players made the most of home ground advantage at Ellis Park to comfortably beat Australia 35-17. It was a confidence boost before Wellington‚ but Saturday will reveal a better picture for both sides about their true standing.

For the Boks‚ at least‚ last week revealed depth in key positions such as scrumhalf and prop. Coach Rassie Erasmus has had jut over a year to build depth in every position and he is rapidly managing to find it.

A Bok win in Wellington would affirm Erasmus’s tactics of routinely mixing and matching his team to build as much depth and experience as possible in such a short time.