Jantjies stars as Stormers down Highlanders 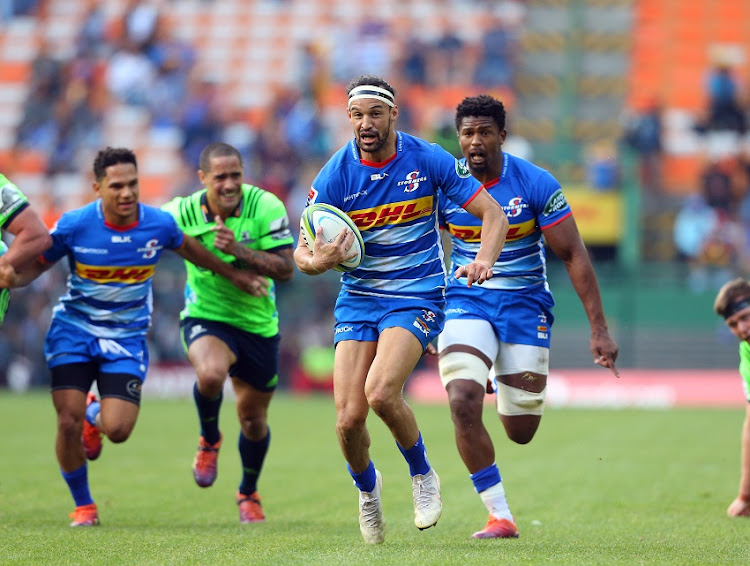 Dillyn Leyds of the Stormers during the Super Rugby match between DHL Stormers and Highlanders at DHL Newlands Stadium on May 25, 2019 in Cape Town, South Africa.
Image: Carl Fourie/Gallo Images

The Stormers can dare to dream of a Super Rugby play-off after an inspired 34-22 win over the Highlanders at Newlands kept their post-season ambitions alive.

Despite scoring four tries the Stormers were unable to secure a bonus point as they allowed the Highlanders in for three second half tries.

Winning though was the Stormers’ primary objective and they achieved that goal comfortably with one of their best displays of the season.

Several key players rose to the occasion, none more so than centre Damian de Allende, who seemed to be involved in everything good the Stormers did.

But the win also appeared to come at a cost as Pieter-Steph du Toit and Siya Kolisi both cried off with injury.

The Stormers produced a quality opening stanza and deservedly went into the break 14 points to the good, although brows were furrowed when skipper Kolisi hobbled off shortly before halftime.

The Bok captain has been in good form in recent weeks and he played an influential role before departing.

It was his try six minutes before the break that really stamped the Stormers’ authority on the scoreboard after dominating the half.

The try was almost a carbon copy of the one Kolisi scored against the Crusaders last week.

He ran at full pace on to a flat pass, which he took slightly behind him, before rounding the last defender to score.

Considering that winning the conference is now out of the Stormers’ control, they played with the freedom of a side released from pressure.

For most of the match it looked like the most fun the Stormers have had this season. They attacked from everywhere but never sacrificed their defensive shape and desire to work off the ball because of it.

Fullback Damian Willemse, De Allende and wing Seabelo Senatla had superb matches, but they were not alone.

Scrumhalf Herschel Jantjies’ ascent continued against one of his heroes in the Highlanders’ Aaron Smith.

The great All Black hopefully gave Jantjies a pat and a friendly word after the contest because he must have been impressed with what he saw up close.

Jantjies was a bundle of buzzing energy and when he wasn’t clearing rucks with speed and accuracy, he sniped and attacked cracks in the Highlanders defence.

He scored a well taken try when running a smart angle after Senatla broke the line to set the Stormers on their way.

The Highlanders were strangely out of sync in the first half and despite fashioning one or two chances for the dangerous Waisake Naholo, which required some brave head on tackles by Willemse and Dillyn Leyds.

They enjoyed their best period of the match in the 15 minutes after the break when they secured almost all the possession.

Smith pulled the strings beautifully in that period and eventually the Highlanders created enough pressure for centre Sio Tomkinson to score after a multi-phase build-up.

But the home side responded well with the visitors suddenly back in a contest where they had barely had a foothold.

From just inside the Highlanders half, Jantjies put Leyds into space and the slippery wing broke the first tackle and was away.

He fed hard working lock Cobus Wiese, who galloped over for the Stormers’ third try, which took them step closer to the bonus point.

That hope was diminished 13 minutes from time when Naholo finished off a well constructed move to keep the Highlanders’ faint hopes alive.