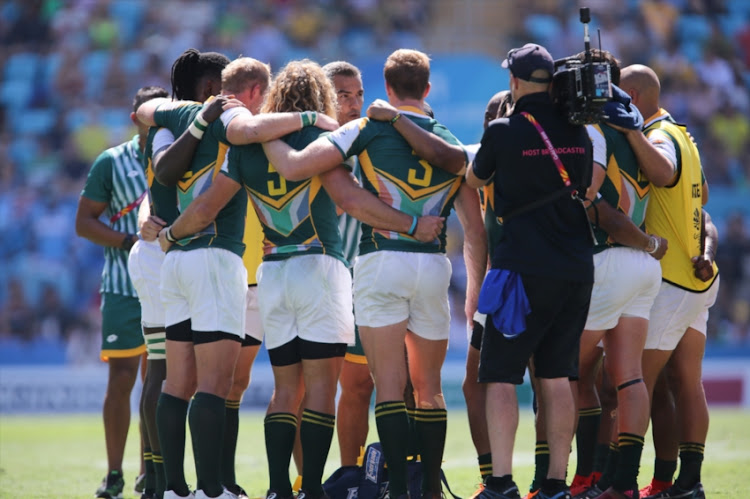 Neil Powell, coach of South Africa, chats to his players during half time during the Rugby 7's semi final match between South Africa and Fiji on day 11 of the Gold Coast 2018 Commonwealth Games at the Robina Stadium on April 15, 2018 in Gold Coast, Australia.
Image: Roger Sedres/Gallo Images

The Blitzboks will face arch-rivals New Zealand in Pool A on home soil at the Cape Town leg of the 2018/19 HSBC World Sevens Series next weekend.

The two sides were paired together after New Zealand won the season-opening tournament in Dubai while SA slumped to sixth place – their worst start to a campaign in five years.

The Blitzboks lost 22-5 to England in the Dubai quarterfinals after topping Pool A despite losing 15-12 to Argentina in group play.

New Zealand were superb all weekend in the Emirate and will start Cape Town as favourites in a Pool that also includes Samoa and Zimbabwe.

NZ are also the reigning Cape Town champions. Despite the poor showing in Dubai, which ended in a 24-19 defeat against Fiji in the fifth/sixth play-off, Blitzbok coach Neil Powell felt his side had gathered some momentum during the weekend.

Powell said there was improvement along the way and he was pleased with certain aspects of their play in the last two matches.

“The fact that we did not play any tournaments before the start of the World Series may have impacted on our performances here in Dubai,” said Powell.

“We managed to control matches for longer spells as the tournament progressed and I am happy with that.”

Powell said they would be looking for more control in matches next weekend at the Cape Town Sevens.

The team is without several stalwarts such as Seabelo Senatla, Cecil Afrika, Kwagga Smith, Ruhan Nel and Dylan Sage, and the absence of those big game players showed in Dubai.

“The reality is that we are in a bit of a rebuilding phase, with a number of experienced guys who have moved on, so it will take a bit of time to be at our very best again,” said Powell.

“I am pleased that we showed progress and we will take another step forward this coming weekend.”

The lack of execution of the basics was the most disappointing aspect of their performance, Springbok Sevens captain Philip Snyman said afterwards.

“We didn’t do the small things well,” said Snyman.

“We were poor in those areas in the first four matches. Against Scotland and Fiji things went more according to plan, but overall we are disappointed. It was a reality check too; you cannot just rock up and expect things must happen for you. We lacked that focus, especially early on.”

The Blitzboks will be keen to get back home and regroup before next weekend. “We will have great support from fans and family, but it will be our responsibility to improve on our performance. We messed up here in Dubai, so it is our job to fix it in Cape Town,” said Snyman.