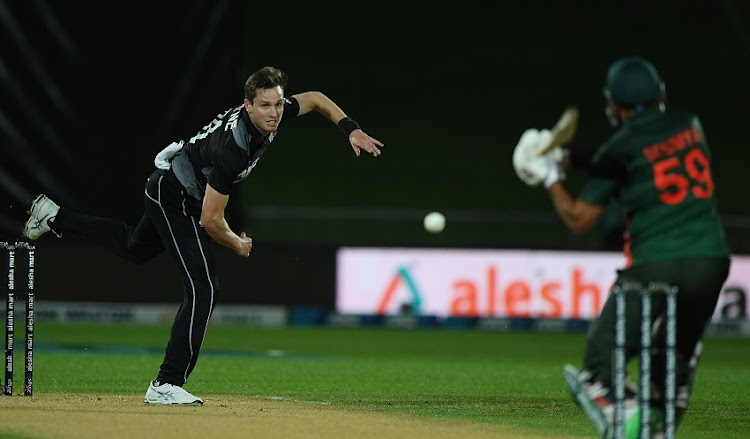 New Zealand's Adam Milne is hoping to make a difference in Sunday's must-win clash against India at the Twenty20 World Cup after being left frustrated on the sidelines for the opening loss to Pakistan.

The reserve paceman had travelled to Sharjah for the Pakistan match but upon arriving was told he would have to sit out because the International Cricket Council had not approved him as an injury replacement for Lockie Ferguson.

New Zealand went with legspinner Ish Sodhi instead, and the ICC's approval arrived shortly before Pakistan completed a five-wicket win.

Milne's late clearance left a sour taste in coach Gary Stead's mouth, and the bowler said he might have helped New Zealand do better against Pakistan.

"I think if you'd looked at the way the pitch played throughout the course of the IPL (Indian Premier League), the faster guys that had been able to hit the wicket hard and create some uneven bounce had caused some problems for the batters,” the 29-year-old told reporters.

"I think I would have been able to add something to the team, but it wasn't meant to be, and I thought our guys bowled really well and unfortunately for us, they came out and batted really well towards that end part of the game."

Milne has struggled with injury in recent years but his omission from the 15-man World Cup squad named in August raised eyebrows at home given his form in Australia's Big Bash League, the Indian Premier League and The Hundred in England.

"I definitely feel like this has been the best period of cricket that I've had in a long, long time," he said.

"I'm excited to hopefully make a difference with the ball in these games here and really prove that this period has been influential for me."

India will look to rebound against New Zealand after having suffered a 10-wicket thrashing by Pakistan in Dubai.