What you said: It’s Quinton de Kock’s decision whether to take a knee or not 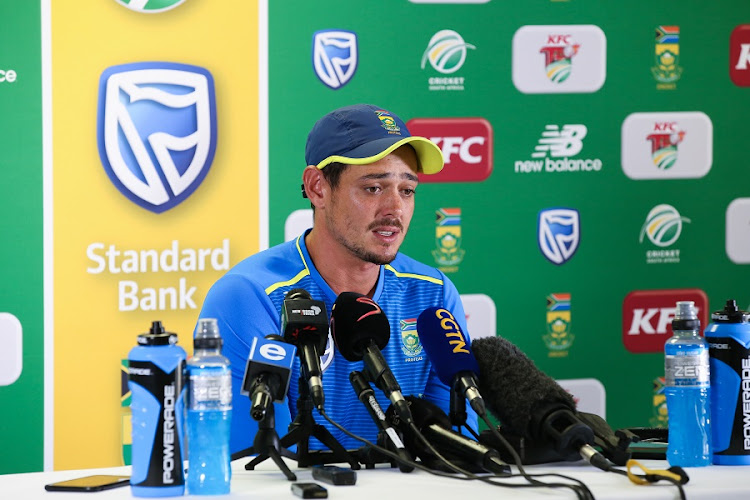 Readers have defended cricketer Quinton de Kock after the star refused to take a knee in support of the Black Lives Matter movement.

De Kock withdrew from the T20 World Cup match against the West Indies this week after Cricket SA (CSA) ordered all players at the tournament to take part in the antiracism gesture.

“Taking the knee” has become a global symbol adopted by athletes across the world to protest against racism and inequality.

In a statement, CSA said it had noted de Kock's decision and was awaiting a report from team management.

“After considering all relevant issues, including the freedom of choice of players, the board had made it clear it was imperative for the team to be seen taking a stand against racism, especially given SA’s history.

“The board’s view was that while diversity can and should find expression in many facets of daily lives, this did not apply when it came to taking a stand against racism.”

De Kock has previously refused to take the knee, standing with his hands behind his back while others knelt ahead of SA's match against the West Indies earlier this year.

He said at the time his decision not to participate in the gesture was personal.

“My reason? I'll keep it to myself. It's my own, personal opinion. It's everyone's decision; no-one's forced to do anything, not in life. That's the way I see things,” he said.

A poll asking what readers thought of De Kock’s decision to not take a knee garnered over 5,300 responses in less than 24 hours.

Most (74%) said it was his decision whether to take a knee.

On social media, opinions were split with some saying de Kock should have participated in the gesture against racism, while others said forcing him to do so would always lead to a “crisis”.

“Keep politics out of sport and most things, and see how quickly the country gets fixed. If not, we will soon all be on our knees begging for someone to help the citizens of SA , just to make ends meet, find work and live freely. It is as simple as that,” wrote Rob Hamman.

“You guys defend a guy who is not following team actions. He is affecting spirit of the team. He needs to be fired by CSA. They pay him to do what is advised to be done by the team. That's it. He is ill disciplined that's it. It's his right, but he is ill-disciplined.”

Forcing people to do things your way will always create a crises situation. Especially if you do it the morning of the match. Well done Cricket SA.

Objecting to show solidarity with the majority of the people you represent says a lot about what he feels about racism. He's not bigger, that CSA and definitely not bigger than our nation. Let him go!!

If I was Quinton right now. I would leave and play for a county or country that believed in me a s a player and not make my playing a political show. You Go Quinton. You did nothing wrong. We all have a right of choice

Cricket SA cannot keep on creating crises after crises. This is their doing and they are losing the fan base in South Africa.