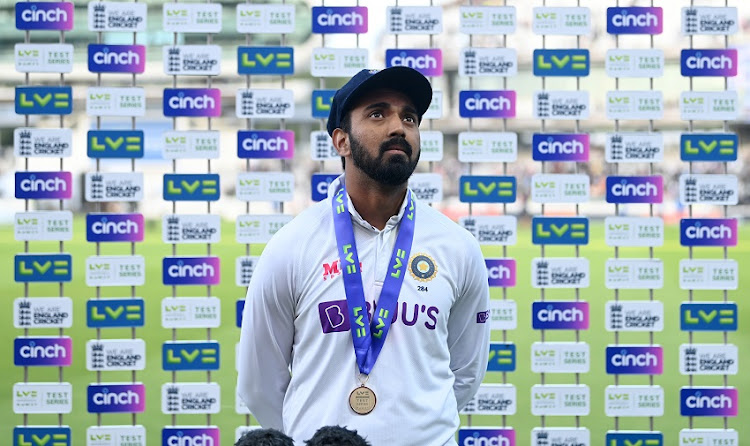 Man of the match KL Rahul of India speaks at the post match presentations on day five of the Second LV= Insurance Test Match between England and India at Lord's Cricket Ground on August 16, 2021 in London, England.
Image: Gareth Copley/Getty Images

KL Rahul was not even India's second-choice opener in England but when the task fell into his lap for the first test at Trent Bridge, the 29-year-old made sure his recall lasted longer than just one match.

With 244 runs from four innings, including a sixth test hundred, Rahul is India's highest scorer in the ongoing five-match series which they lead 1-0.

After Shubman Gill returned home with a stress fracture before the series had started, Mayank Agarwal was expected to be Rohit Sharma's opening partner in Nottingham.

But Agarwal suffered concussion during training, leaving Rahul to step in for his first test in almost two years - and now in no mood to surrender that position.

Rahul's 84 was the highest score by an Indian in the drawn Trent Bridge test as was his 129 at Lord's, where his team demolished England on the final day to triumph by 151 runs.

An automatic choice in limited-overs cricket because of his free-scoring style, Rahul has now demonstrated his ability to play the waiting game too.

"Rahul's comeback as an opener in test cricket wasn't so much about his ability to succeed at the top - you don't score five test tons (four of them away from home) if you don't have the skills," former India opener Aakash Chopra wrote in ESPNCricinfo website.

"If his first innings of the tour, 84 at Trent Bridge, showed that he's trusting his skills against the new ball, Rahul's century at Lord's established that he is back for good."

Curbing a tendency to chase balls outside the off-stump, he scored off only 18 of the first 100 balls he faced at Lord's and accelerated later.

"He's willing to bide his time and wait for the right moment to up the ante," Chopra said. "The next challenge for him is to extend this good form for as long as possible."

The third test starts at Headingley on Aug. 25.