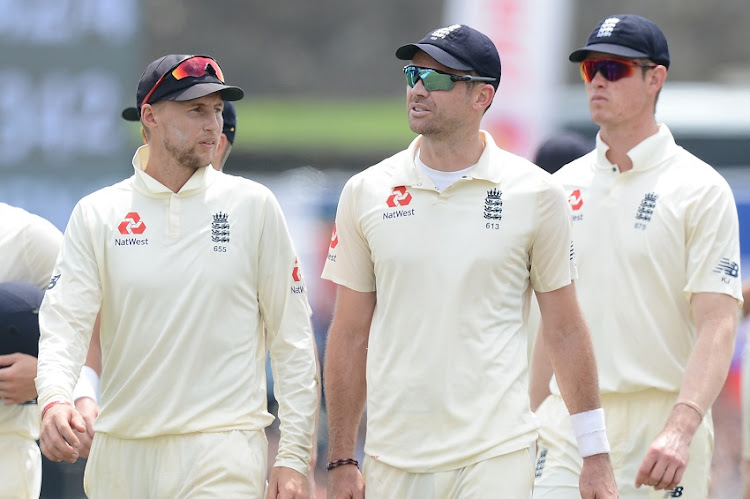 Joe Root (L) and James Anderson (C) of England having a chat while they walk back to lunch during day 2 of the 1st Test match between Sri Lanka and England at Galle International Cricket Stadium on November 07, 2018 in Galle, Sri Lanka.
Image: Isuru Sameera Peiris/Gallo Images

England's record wicket-taker James Anderson has been included in England's Test squad for the forth-coming four-Test series against South Africa later this month.

The 37-year-old swing bowler who is England's top wicket-taker with 575 wickets from 149 Tests‚ has been out of international action since the first Ashes Test against Australia in Birmingham with a calf injury that saw him miss the rest of the series.

He also missed the recent 1-0 series against New Zealand‚ but he was in a training camp in Potchefstroom along with fast bowler Mark Wood and wicketkeeper-batsman Jonny Bairstow.

National selector Ed Smith said on the England and Wales Cricket Board that it made sense for them to pick a big squad when they have players who have recovered from injury.

“With James Anderson and Mark Wood returning to the squad‚ Saqib Mahmood is the unfortunate player to miss out. It is not predicted that Mark [Wood] will be available for selection for the earliest matches‚” Smith said.

“However‚ he will travel with the team and continue his rehab work with the medical staff on tour. There is no exact date given for his return‚ but the medical team is working towards him becoming fully available for selection during the tour.”

Bairstow was dropped from the Test team to work on his red-ball game‚ but he was missed when Jos Buttler pulled up lame and had to be replaced by Ollie Pope‚ who is also in the squad.

England will begin their tour on December 17 with matches against a Cricket South Africa XI and South Africa 'A' in Benoni before the series' first Test at SuperSport Park in Centurion on Boxing Day.