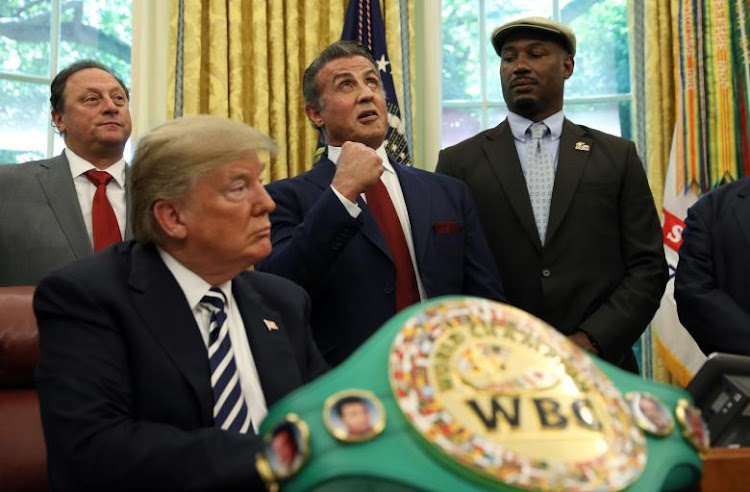 Boxer Lennox Lewis (R) stands by as actor Sylvester Stallone looks toward the heavens and offers up a punch in honor of the late Jack Johnson, the first black heavyweight boxing champion, whom President Donald Trump pardoned at the White House on May 24, 2018.
Image: REUTERS/Kevin Lamarque

Johnson was the first African American boxer to conquer the heavyweight championship of the world but he suffered discrimination and he was jailed for ten months on spurious charges.

Thousands of people wanted Johnson‚ who died in a car crash in 1946 at the age of 68‚ to be pardoned posthumously.

“One wishes to commend US president Donald Trump for pardoning Johnson although posthumously. These guys and many other African American achievers suffered badly through racism just because they were prominent black figures‚” said Ngatane.

“It’s my honor to do it. It’s about time‚” Trump was quoted by US media at a ceremony where he was joined by former world heavyweight champion Lennox Lewis and actor Sylvester Stallone who drew awareness to Johnson’s cause.

Trump said Johnson served ten months in prison for what many view as a racially-motivated injustice and described his decision as an effort “to correct a wrong in our history”.

“He represented something that was both very beautiful and very terrible at the same time‚” added Trump.

Johnson was convicted in 1913 by an all-white jury for violating the Mann Act‚ which made it illegal to transport women across state lines for “immoral” purposes‚ for travelling with his white girlfriend.

Ngatane said he would have been happier had Trump expounded Johnson's alleged crime.

“That is because pardon in my view means the case was there but if it is expounded it simply means it disappears completely from his records. By law‚ I would have been happier if his name is cleared completely just like the case of Rubin Carter‚” said Ngatane.

Carter was an American-Canadian middleweight boxer who was wrongfully convicted of murder and later released following a petition of habeas corpus after spending almost 20 years in prison.

US still resisting pardon for Johnson

WASHINGTON - US Congressional supporters of a pardon for Jack Johnson, the world's first black heavyweight champion who was imprisoned nearly a ...
Sport
10 years ago

WASHINGTON - The US Congress approved a resolution on Wednesday urging a presidential pardon for Jack Johnson, the late black heavyweight champion ...
News
12 years ago

WASHINGTON - In a hard-hitting symbol of progress in race relations, the fight for a pardon of Jack Johnson, the first black heavyweight boxing ...
News
12 years ago
Next Article