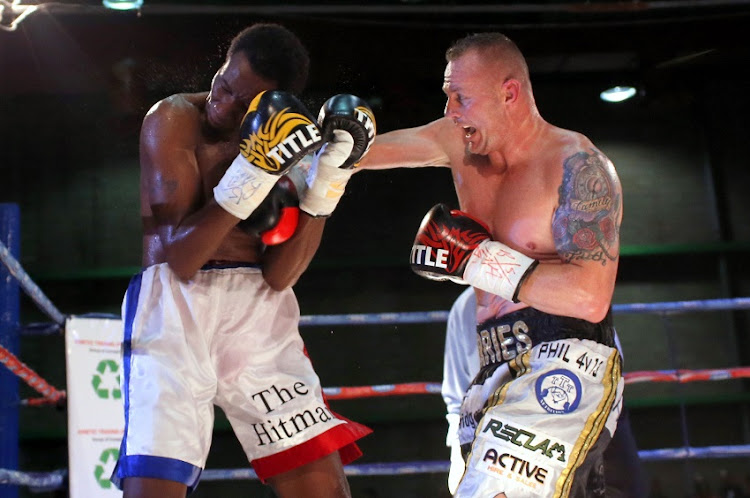 Barend van Rooyen and Yanga Phetahni exchange leather during their fight for the vacant SA middleweight title which Van Rooyen won by a sixth round stoppage in Kempton Park on Saturday night.
Image: Christo Smith

The status of Barend “Barries” van Rooyen and Ruann “The Giant King” Visser is confusing as they remain SA boxing champions despite being found guilty of doping by the SA Institute for Drug-Free Sport (Saids).

Van Rooyen is the middleweight title holder. The 40-year-old veteran has already been suspended for two years after being found guilty for using banned substances when he won the SA title in December.

Visser, 27, holds the heavyweight title and has recently been provisionally suspended after he tested positive for steroids.

He is still within the 21-day window period where he can ask to have a B-sample analysed.

The general feeling is that the two boxers should have been stripped of their titles the day Saids announced that they tested positive for drugs.

Their said bouts should be declared no contests as per the Saids recommendation and their names should have been removed from the national rankings long ago.

BSA should have then declared both titles vacant and appointed two contenders to fight for them rather than punish title contenders because of the two boxers who failed dope tests.

Boxing SA has been found wanting by allowing these boxers to hold the sport to ransom.

BSA chief operations officer Cindy Nkomo agreed that Van Rooyen should be stripped and removed from the ratings because it is unclear when his hearing will take place.

“Ruann is awaiting the hearing,” she said.

Visser, who has been a professional boxer since 2014 with only 14 fights, tested positive for steroids after his seventh-round TKO win over defending heavyweight champion Osborne Machimana in February.

Saids has provisionally suspended him from competition and the whole saga has left promoter Lebo Mahoko as confused as his boxer Justice Siliga.

“Justice and Visser signed with me to feature in my tournament this month. I am totally confused now. I need clarity on this matter before I lose my nuts,” Mahoko said.

Said Siliga: “I am not sure whether to continue training for Visser or stop going to the gym.”