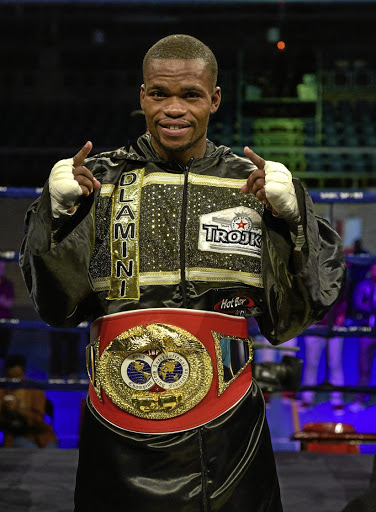 Dlamini was declared the winner by a split points decision against Sydney "Skeleton" Maluleke after 12 closely contested rounds of an enthralling bout that topped Golden Gloves "High Noon" bill.

Judges Siya Vabaza and Neville Hotz scored the fight 115-113 and 114-113 for Dlamini, while Francis Manning voted Maluleke as the winner with 114-113. Maluleke, who is trained by Bernie Pailman, won the first four rounds in two of the three judges' scorecards.

The same judges had the fight even at 76-76 after eight rounds.

The fight was a tie after 11 rounds. Maluleke looked to have won the 12th and last round.

Referee Ishmael Koali docked Maluleke a point for holding in the ninth round, and the assumption based on the scorecard, especially that of Hotz, was that the fight would have been a draw had Maluleke not been docked that point.

For the second time in three Commonwealth Games‚ South Africa has failed to win a boxing medal.
Sport
4 years ago

Ngatane voiced his unhappiness over Pailman's conduct after the trainer confronted Koali during the fight.

Ngatane also explained to Pailman that Maluleke lost the fight due to a point that was docked for holding.

But Pailman would hear none of that as emotions ran high. Then Maluleke's fans took their turn, blasting the officials for being biased towards Dlamini.

Promoter Rodney Berman was so impressed by the action inside the ring that he pledged an extra R5000 to the two boxers' purse monies.

Berman said he raised R10000 for Buqwana who attended the tournament.

Trainer Sean Smith also left the arena a very angry man after his charge Sibusiso "Spook" Zingange had to settle for a draw with Anthony Moloisane over eight rounds.

Toto Helebe retained his SA bantamweight title on points against Mbulelo Dayi in another bout that formed part of the Rumble Africa tournament of promoter Thembalethu Ntutu at the Orient Theatre.