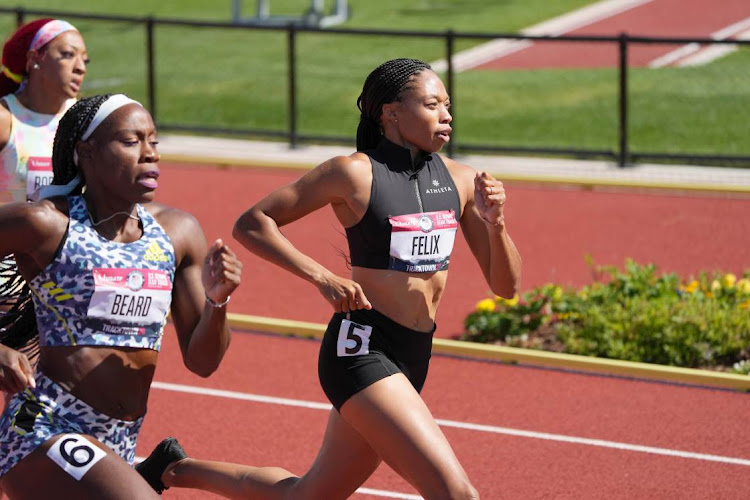 Allyson Felix wins the women's 400m in 50.99 during the US Olympic Team Trials at Hayward Field.
Image: Kirby Lee

The U.S. Olympic Track and Field Trials got off to an electrifying start on Friday, as 2016 gold medalist Ryan Crouser shattered the shot put world record and six-time gold medalist Allyson Felix began her quest to reach a fifth Games.

Crouser exceeded fellow American Randy Barnes' 31-year-old record by 25 centimetres with a 23.37-metre throw, letting out a roar inside the newly renovated Hayward Field in Eugene, Oregon, to wild applause from fans.

"The second it left my hand I knew it was good," he told reporters.

Felix, 35, the United States' most decorated female track athlete, put up an age-defying performance to win her 400m heat in 51 seconds, as her 2 1/2-year-old daughter Camryn watched and cheered from the stands.

"I’m taking everything in, not taking anything for granted. It’s been a long journey," said Felix, who has stated this will be her last Olympic trials. "I feel at peace with everything and I feel very prepared."

LONDON - A year after athletics was at the heart of London 2012, the sport's biennial world championships is in danger of losing its lustre after a ...
Sport
9 years ago

Felix, who has picked up 13 world championship medals across her dazzling, nearly two-decade-long career, said she was savoring the time she gets to compete in front of Camryn, before she retires.

"Initially I was so disappointed with everything getting postponed, and then I began seeing all of the silver linings," said Felix. "She's just so aware."

Already a star at age 21, Sha'Carri Richardson proved she was worth the hype as she recorded a blistering 10.84 in the 100m, the top time in the event, despite her shoe coming untied during the race.

"I’ll be sure to lace them and tuck them for the next rounds to come," said Richardson, who achieved a 24.1 mph (38.8 km/h) top speed during the sprint.

"To win the Olympics, I’m gonna say it could take a world record," she added. "There are so many phenomenal names that are predicted to be at the Olympic Games."

LONDON - A year after athletics was at the heart of London 2012, the sport's biennial world championships is in danger of losing its lustre after a ...
Sport
9 years ago

Caster can now focus on gold

After keeping a low profile the last month or so, Caster Semenya will finally step into action to bid for the Olympic gold she missed four years ago. ...
Sport
5 years ago

The nominees of the 2018 Laureus World Sports Awards were announced on Tuesday and SA’s Caster Semenya will face off against 2017 Wimbledon champion ...
Sport
4 years ago
Next Article