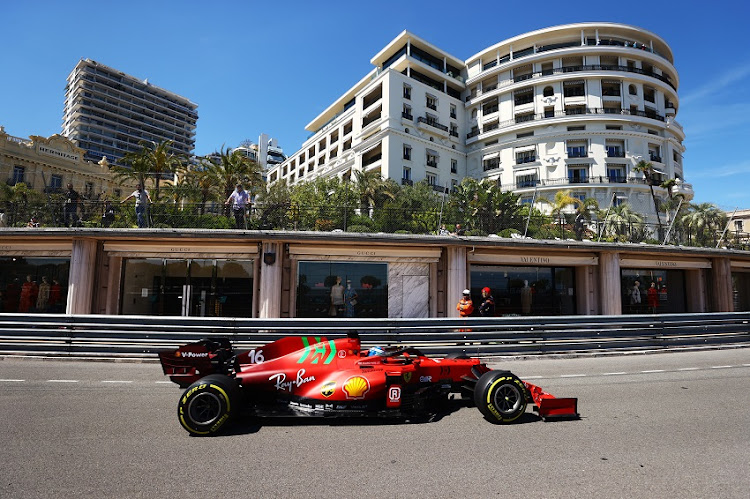 Charles Leclerc of Monaco driving the (16) Scuderia Ferrari SF21 on track during practice ahead of the F1 Grand Prix of Monaco at Circuit de Monaco on May 20, 2021 in Monte-Carlo, Monaco.
Image: Bryn Lennon/Getty Images

The 23-year-old Monegasque, born and bred in the Mediterranean principality, lapped the metal-fenced layout with a best time of one minute 11.684 seconds in the afternoon session.

Leclerc, who has yet to score a point on home territory, had managed only four laps in the morning sunshine before being sidelined by a gearbox problem that left him bottom of those timesheets.

"The Ferraris look really strong," said Hamilton, who has a 14 point lead over Red Bull's Max Verstappen after four races.

"It’s surprising to see them improve so much but that’s great, it means more competition."

It was the first time Ferrari had led a practice session since Sebastian Vettel, now at Aston Martin, was fastest in Hungary last July.

The team failed to win a race last year and finished sixth overall, a 40-year low.

Verstappen was fourth fastest and unhappy with his car's performance.

"We are too slow, and not just a little bit, I think quite a bit. So we need to really find some pace," said the Dutch driver.

"It also didn't feel great to drive. Normally I'm quite comfortable in the car... but it all takes too long and not how I like it. So far the most difficult weekend.

"I'm just surprised how competitive Ferrari is," added Verstappen. "I think it just shows that we are pretty weak. They are doing very well and we are very weak."

The afternoon session was stopped five minutes early after Mick Schumacher hit the barriers sideways at Massenet and parked up after going through the tunnel, with the Haas needing to be removed.

Verstappen's team mate Sergio Perez was fastest for Red Bull in the opening session, his first time on top since joining the team this year.

The Mexican had a best time of 1:12.487 on the soft tyres, with Sainz again second quickest and 0.119 off the pace, with Verstappen third.

"I'm just enjoying it a lot," said Perez, who was also surprised by the pace of the Ferraris. "I am definitely getting more comfortable and learning more from the car."

Hamilton, who has won three races to Verstappen's one, was fifth on the morning timesheets, with team mate Valtteri Bottas sixth. AlphaTauri's French driver Pierre Gasly was fourth fastest.

The race, a highlight of the calendar, was cancelled last year due to the pandemic but has returned with 40% capacity in the grandstands and 7,500 ticket holders a day.

Practice is traditionally on Thursday in Monaco rather than the usual Friday, which is a rest day for Formula One before Saturday qualifying.