Serena back in search of reclaiming her crown 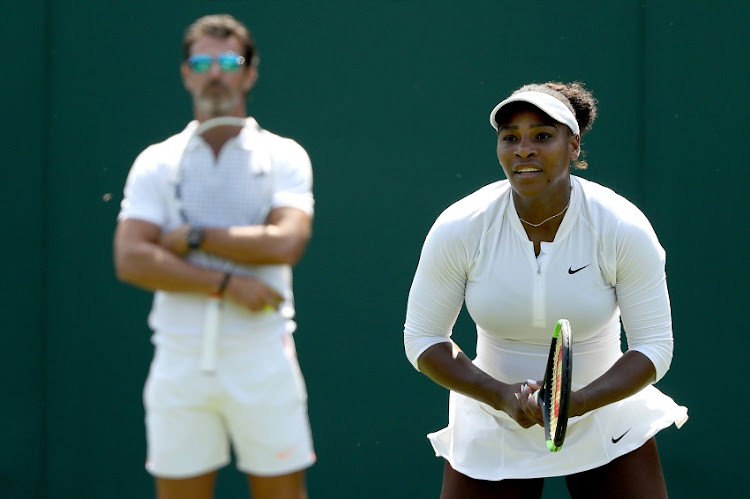 Coach Patrick Mouratoglou watches as Serena Williams of the United States practices on court during training for the Wimbledon Lawn Tennis Championships at the All England Lawn Tennis and Croquet Club at Wimbledon on June 28, 2018 in London, England.
Image: Matthew Stockman/Getty Images

Garbine Muguruza is the reigning Wimbledon champion but all eyes will be on Serena Williams next week when the American begins her mission to snatch back the title she believes she owns.

The 36-year-old Williams has not lost on the London lawns since she was upset by France’s Alize Cornet in 2014, winning the 2015 and 2016 titles to swell her Wimbledon tally to seven, two behind professional era leader Martina Navratilova.

She watched on from afar last year as she prepared to give birth to daughter Alexis Olympia in September.

While she admits her return to competitive action has not been easy, she has been practising hard on the grass and few would bet against her becoming the first mother to win the title since Evonne Cawley 38 years ago.

Should she achieve that feat she would equal Margaret Court’s record of 23 Grand Slam titles, although not all of Australian Court’s were claimed during the professional era.

Williams has played only seven matches since returning to the Tour but there were signs at the French Open, where she was not seeded but reached the fourth round before withdrawing with a pectoral injury, that she was moving in the right direction.

Her Wimbledon hopes have been boosted by the seedings committee who installed her as the 25th seed in Friday’s draw which paired her with lowly-ranked Dutchwoman Arantxa Rus.

Not everyone has supported the decision to seed her despite a ranking of 183 but she will still face a tough path with Ukraine’s fifth seed Elina Svitolina looming in round three.

Former men’s world number one Mats Wilander watched Williams at Roland Garros in his presenter role with Eurosport and believes she will be a far more formidable for at Wimbledon.

“I think she is the most dangerous floater, I would say she is now 100% ready,” Wilander told Reuters.

“With her game she doesn’t need lots of grasscourt matches. When you hit the ball as hard as she does it’s first-strike tennis and no one is better than her at that.”

Muguruza’s game could be modelled on Serena’s, as she showed last year when overpowering Venus Williams in the final to become the first player to beat both Williams sisters in Grand Slam finals having downed Serena at the 2016 French Open.

She is seeded three at Wimbledon, behind world number one Simona Halep and Caroline Wozniacki who have shared the year’s two Grand Slam titles to date with maiden triumphs.

Halep, who finally got over the line at the French Open this month, will be full of confidence, as will Wozniacki after a strong run on the lawns of Eastbourne this week.

Twice Wimbledon champion Petra Kvitova will also be one to watch, as will 2004 champion Maria Sharapova who is back at the event where she made her name for the first time in three years having missed the last two because of a doping ban and then an injury.