Now Hunt slams pitch as 'too big, too wide' 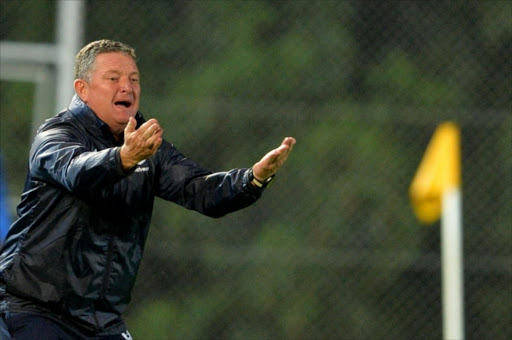 But unlike his Mamelodi Sundowns counterpart Pitso Mosimane, who likened the venue to a grazing field after his side were held to a 1-1 draw by Chippa United last month, Hunt was less harsh and complained about the pitch being "too big".

A visibly disappointed Hunt told reporters after Tuesday night's 0-0 stalemate between the Chilli Boys and the Clever Boys, that the length of the pitch was to blame for the somewhat dull game.

Asked if the strategy in the first half was to sit back and play on the counter, Hunt said that was never their plan. "We wanted to press the middle third of the pitch. Why go into the top end of the pitch when it's a 110, 120 metres? "Why do you want to go there?

"Your team is going to get stretched and you're going to play too stretched. You don't want your team stretched," he said.

According to world football governing body Fifa's rules, the standard length of a football pitch should be between 90m and 120m, while its width should be from 45m to 90m.

Sisa Dukashe met the minimum PSL requirements and was given the green light to host some of Chippa's home games this season.

The game, played in front of a decent crowd in a drizzling Mdantsane failed to live up to its billing, as both teams are known for their good football.

The draw took Wits to the summit of the PSL log due to superior goal difference.