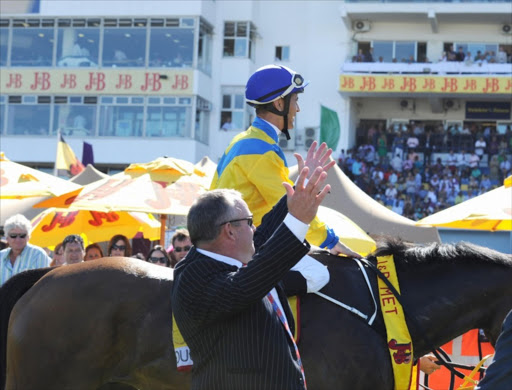 Race horse trainer Mike de Kock reached an unprecedented milestone of 3 000 career winners on Saturday when the three-year-old colt Janoobi triumphed in the R1-million Gauteng Guineas at Turffontein on Saturday.

De Kock‚ South Africa’s most famous trainer internationally‚ having competed with distinction in all major racing countries‚ was not on the racecourse to acknowledge the cheers as he is currently in Dubai in the lead-up to the World Cup.

Janoobi was led into the winner’s circle by his son Matthew‚ his assistant‚ with grooms from the De Kock stable singing and chanting in celebration.

De Kock started the Guineas meeting three wins short of 3 000 and hit the target with a treble — landing three of the four major races in the programme: the HawaiiStakes with Rafeef‚ the Acacia Handicap with Nother Russia and the Guineas with Janoobi. - TMG Digital