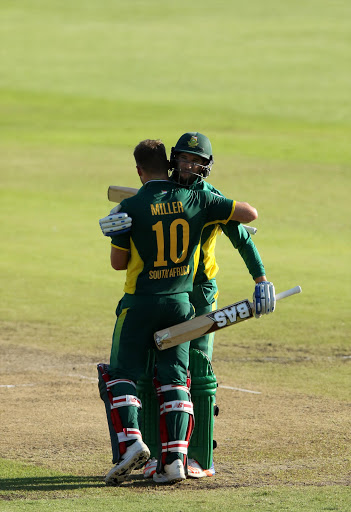 David Miller and Wayne Parnell during the 2nd ODI between South Africa and Sri Lanka at Sahara Stadium Kingsmead on February 01, 2017 in Durban, South Africa. (Photo by Anesh Debiky/Gallo Images

In the afterglow of Wednesday’s triumph over Sri Lanka in the second one-day international at Kingsmead‚ South Africa might need to take aim at a different moon shot.

Faf du Plessis and David Miller scored centuries in South Africa’s total of 307/6 on a pitch that slowed as the innings wore on.

Then Sri Lanka were dismissed for 186 in 37.5 overs with the entire attack taking wickets and all the frontline bowlers going for fewer than a run a ball.

A fine performance in the field was punctuated by brilliant catches by Du Plessis and AB de Villiers‚ and a wonderful runout by JP Duminy.

“It shows that we as a batting unit are becoming more mature‚ making the right decisions and that we are assessing the conditions and the situation really well‚” Du Plessis said.

He might have been describing South Africa’s entire performance‚ but particularly the stand of 117 he and Miller shared for the fifth wicket in the 22.2 overs they were at the crease together.

Du Plessis scored 105 and Miller made an undefeated 117 to mark the first time in 16 ODIs that two South Africans had reached centuries in the same innings.

“Myself and Dave complemented each other well‚” Du Plessis said.

“We ran well between the wickets and put boundaries away when there were boundaries opportunities.”

Du Plessis reached his ton off 113 balls‚ Miller off 94 – testament to the changing conditions and match situation as much as it was to the relative strengths of each player.

“I feel like I hit baby sixes compared to what he does.

“It’s great to bat with him because you know he can shift gears and the gameplan for him and for myself was not to even try and take any risk.”

Du Plessis stuck to his proven method‚ but Miller’s innings was notable for his willingness – and ability – to play less emphatic strokes when needed.

“It’s great to see that he can adapt his gameplan to what the situation is‚” Du Plessis said.

“He is not just a power-hitter; he is a smart batsman as well now.

“He has become a real world-class batsman.

“Thirties and 40s are not what’s going to make him a great and he is coming to believe he can do more now‚ and that’s going to win us games of cricket.”

Du Plessis pulled off a backhand grab in the covers to remove Niroshan Dickwella that was reminiscent of his catch at second slip to complete Angelo Mathews’s dismissal in the third test at the Wanderers last month.

“The test one [catch] will be hard to beat‚” Du Plessis said.

“The ball was traveling very quickly and it was a lot higher.

“My legs were just too tired — I couldn’t jump up off the ground.”

“If you look at the first 10 overs the guys that are in the ring are all brilliant fielders‚” Du Plessis said.

“There’s not any fielder that’s in the ring that’s a bowler.

“All of them field at point or cover for their franchises.”

Sri Lanka coach Graham Ford‚ who has also worn South Africa’s tracksuit‚ could only admire what he saw from the visitors’ dressingroom.

“Their top six is devastating and the pressure’s always on with that bowling unit‚” Ford said.

“I’m not sure that there’s any other side in world cricket that can field as brilliantly as they do.

“They saved plenty of runs‚ took two brilliant catches and had a real Jonty Rhodes-style runout.

Another win for South Africa at the Wanderers on Saturday will kill the series‚ too.