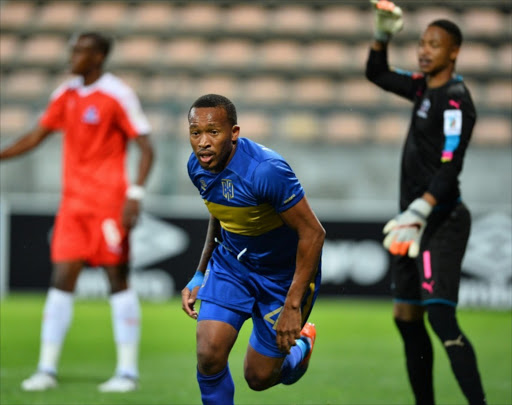 Lebogang Manyama netted 15 minutes from time to catapult Cape Town City to the top of the Premier League table with a 3-2 victory over Maritzburg United at Athlone Stadium on Tuesday.

City are now a point clear of BidVest Wits at the top of the table, but have played three games more than Gavin Hunt’s side, who are in action on Wednesday at home to Highlands Park.

Lehlohonolo Majoro and Sibusiso Masina also netted for the home side, while Brian Mandela and a superb Evans Rusike free-kick almost snatcheda point for Maritzburg.

The win is a sixth in a row for City, who now host Free State Stars at the same venue on Saturday afternoon as they go in search of a first cup final in the Telkom Knockout.

It completes a fairytale few months for coach Eric Tinkler, who also helped the side into the semifinals of the MTN8 and is building a team of some resilience and flair on Cape Town.

For Maritzburg is was a disappointment after they were unable to build on their 2-1 away victory over Ajax Cape Town at the weekend.

But the visitors were ahead inside six minutes from an unlikely source as defender Onyango, just returned from suspension, latched onto the end of an Rusike cross.

It was a first of the season for the Kenyan international, who last found the back of the net in January.

But City, who have found their scoring boots in recent weeks, were level as Majoro steered home Thamsanqa Mkhize’s from a set-piece for his third goal in four matches.

That was the way it stayed until the break, but City then caught the visitors cold right at the start of the second period as Given Mashikinya played in Masina to net a fine second for the home side.

It was a first ever Premier League goal for the 26-year-old, with his other three strikes for Mpumalanga Black Aces and now City all coming in cup competitions.

With the action swinging from end-to-end, Maritzburg managed to draw themselves level with a sublime free-kick from Rusike that had the beating of home goalkeeper Samora Motloung.

He fired his effort into the top corner to underline his quality in what has been a barren season so far for the Zimbabwean international that had yielded just a single goal.

But City’s attacking threat this season has been built on the pace and intelligence of the Aubrey Ngoma-Manyama combination and this worked again with 15 minutes remaining.

Winger Ngoma created the space for the pass and Manyama provided the finish for a fifth of the season, underlining his status as one of the form players in the PSL.