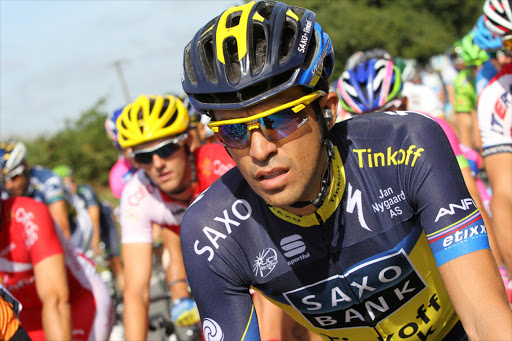 According to Tinkoff-Saxo cycling team, Russian billionaire Oleg Tinkov's 1 million euro challenge is no "joke" and will help develop the sport's popularity.

Tinkov is trying to entice Alberto Contador and his three biggest rivals to compete in all three Grand Tours next year with a 1 million euro prize to share if they commit to racing at the Giro d'Italia, the Tour de France and the Spanish Vuelta in 2015.

The eccentric businessman's proposal received a positive welcome and Tinkoff-Saxo said Monday the idea "will be beneficial to the sport of cycling" because it will boost audiences worldwide.

In addition to Contador, who rides for Tinkov's team and has already won all three Grand Tours, the billionaire is hoping to convince Chris Froome, Nairo Quintana and Vincenzo Nibali to be on the starting line of the three-week events.

Contador has already said he will be targeting a Giro-Tour double this season but his participation at the Vuelta has yet to be confirmed.

"Racing in the three Grand Tours isn't an issue in itself for the world's best riders, they will not have any problems with that," Saxo-Tinkoff team manager Bjarne Riis said. "However, winning or going for a podium place in all three is another thing and that will narrow it down to very few people. I think there is a very small number of riders that are able to accomplish such a remarkable feat and we still don't know who they might be, because it hasn't been done before. That's the beauty of this challenge."

Three-week races are so challenging that no rider has been able to win more than two in the same season. The last rider to have achieved the feat is the late Marco Pantani, who won both the Giro and the Tour in 1998, at a time when cycling was riddled with doping problems.

Only six riders, including Contador and this year's Tour champion Nibali, have won all three Grand Tours in a career.

"This isn't a joke or a publicity stunt. We are very serious about it and we feel it is a proposal that will help cycling move forward," Feltrin said in a statement. "We look forward to further discussing it with the key stakeholders."

Team Sky general manager Dave Brailsford, who guided Bradley Wiggins and Froome to Tour de France wins, said having the best riders racing together in the biggest races would please the fans, although winning the three races the same year would pose a huge physical challenge.

Like Contador, Nibali is planning on competing at both the Giro and the Tour while Froome's schedule remains to be defined. Giro champion Quintana is expected to focus on the Tour de France after his runner-up finish to Froome in 2013.

The routes for the 2015 Tour and Vuelta have yet to be announced but Riis is convinced Contador can achieve a top-three finish at all Grand Tours if he decides to take up the challenge.

"He has the capacity to do it. Nevertheless, I think that extraordinary physical capacity alone will not be enough," Riis said. "It is a very important factor but a rider needs three more crucial elements: the ability to recover between races, the mental strength and a perfect preparation and planning of the season."