Misfiring Ozil is a worry for Gunners 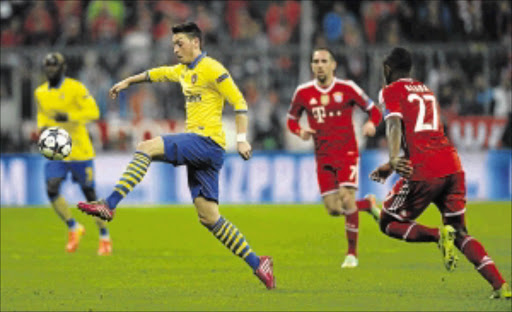 LONDON - When Arsenal paid a club record £42-million (about R753-million) for Mesut Ozil last August, it was with nights like Tuesday in Munich in mind.

Trailing 2-0 from the first leg of the Champions League last-16 tie against holders Bayern, it was the perfect stage for Germany playmaker Ozil to deliver a grandstand performance.

What transpired, however, was a brief cameo as Ozil vanished at half time with a hamstring niggle after being virtually invisible for the opening 45 minutes in the Allianz. Arsenal eventually bowed out after a battling 1-1 draw - Lukas Podolski equalising with a rocket shot after Bastian Schweinsteiger had put Bayern 3-0 up on aggregate - and their season is in danger of fizzling out.

After setting the pace in the Premier League Arsenal are now seven points behind leaders Chelsea with a game in hand after registering only one league win in their last four.

Their best bet of ending a nine-year wait for silverware rests with the FA Cup where they face second tier Wigan Athletic in the semifinals.

Manager Arsene Wenger will point to long-term injuries to Aaron Ramsey and Theo Walcott, while Jack Wilshere is now also sidelined with a broken foot sustained on England duty.

He also highlighted keeper Wojciech Szczesny's red card in the first leg against Bayern as a turning point in the tie.

Ozil's worrying loss of form will be as perplexing for the Frenchman as his likely three-week lay-off.

He has not scored in the Premier League since before Christmas and, more tellingly, his ability to influence games with a range of passing that made him "king of the assists" earlier in the campaign has waned. - Reuters